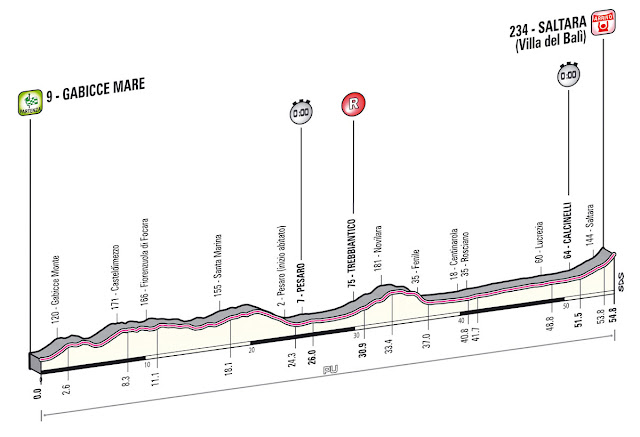 This is the first of two individual time trials in this year’s Giro d’Italia and it’s the day Bradley Wiggins has to make his mark on the race. These 54.8 km against the clock will change the general classification completely and the tiny climbers will end up losing many minutes on this stage. Most of the riders in this race have probably never done such a long time trial in a Grand Tour and it’ difficult to predict how their legs - and mind - will react to this brutal test.

The time trial is hard right from the beginning and if the distance wasn’t a tough enough enemy already, the last 3 km will be. After more than 50 km on the TT bike, the riders face the final uphill part towards the line. It starts out gently with 3.6% but the last kilometer kicks up with 13%. After such a long stage, and Stage 7 still in the legs, many riders will hit the wall and cross the line as if it was the top of Zoncolan.

Talking about favorites, there is really only one. Bradley Wiggins should be in a league of his own for this stage but it all depends on his condition after the crash on Stage 7. Wiggins tried out the course a couple of weeks before the Giro started and said he found it extremely hard. I have no doubts Bradley Wiggins will win this stage if he’s ready, and now he must be even more motivated than before. He’s 1:32 min after Beñat Intxausti and 1:27 min after Nibali. Before Stage 7, I had Wiggins to beat both of these with about 2 minutes, so don’t be surprised if he ends up in Maglia Rosa after all.

Vincenzo Nibali isn’t known for being a time trial specialist but on a course like this one, he should be able to fight for the best positions. Nibali has been working hard on the TT bike the last couple of years and even though he can’t match Wiggins on the flat parts, he will be able to push hard in the uphill sections. He finished 9th in the time trial in the Tour de France last year and he started out strong in Argentina with a 4th place this year. I think Nibali will be satisfied if he doesn’t lose more than 2 minutes to Bradley Wiggins in this stage and if so, he should be able to do Top5. On a great day, he could make Top3.

Top3 is definitely also an option for Cadel Evans. I didn’t give the Australian many chances in the my overall preview since he’s aiming at the Tour this year. Still, he has been very strong in the first week and he could very well end making another good result in this time trial. It’s difficult to predict how Cadel Evans will do against the clock since he hasn’t really been going all out in the ITTs this year, but if he has a good day, he could make Top3 and maybe even take the jersey?

I’ve said many times that I expect big things from Beñat Intxausti in this Giro d’Italia and after taking the Pink Jersey he now has a chance to gain more time GC rivals like Scarponi, Gesink, Santambrogio, Kiserlovski etc.  Intxausti is a very good time trialist and he always gets better when the terrain is tough. He has never done such a long time trial before in his career and that does talk against him, but I still think he will surprise you and make a great result. It won’t be easy to keep the jersey but it’s definitely not impossible. May 23rd marks the day of Xavier Tondo’s death and so close to the day, I’m sure Intxausti won’t feel alone on the bike despite the long distance. He dedicated the jersey to Tondo and his grandfather after Stage 7, and both will be with him in spirit on Stage 8.

Other riders to look out for in this stage are Fredrik Kessiakoff and Manuele Boaro. Kessiakoff knows what it takes to win a time trial in a Grand Tour and after starting out the Giro a bit sick, he now seems to be back in shape. Manuele Boaro is a very talented time trialist and he has shown great legs the last couple of weeks. He didn’t impress much in the time trial in Tour de Romandie but I’m sure he has been targeting this one for a while. Teammate Mads Christensen has also been very strong in his recent time trials and I think he could do Top10 in this one on a good day.

Dario Cataldo would have been another good pick for a Top3 place in this stage, but being sick since the TTT, Cataldo doesn’t seem ready for such a hard fight against the clock already. Naturally, Cataldo will be eager to show off his Italian Champion jersey but being only at 70% - his words - right now, I doubt he has what it takes. In theory, Rigoberto Uran could do very well, but with Team Sky backing Bradley Wiggins 100%, Uran and the rest of ‘gregarios’ could take it easy and save some energy for the mountains.

Last rider I would like to point out is Taylor Phinney. The young American seems like a good pick but like Cataldo, also Phinney has been sick recently. Of course, he will give it his all, but it won’t be easy to perform well in this time trial if you’re not 100%.

You'll find the starting order for the time trial here.

I promised you something extra for the Giro previews this year and here it is. In collaboration with GNC, you’ll find a short video preview of each stage of the race. Here is Stage 8:

For live coverage of the stage check out steephill.tv
Posted by Mikkel Condé at 9:41 PM