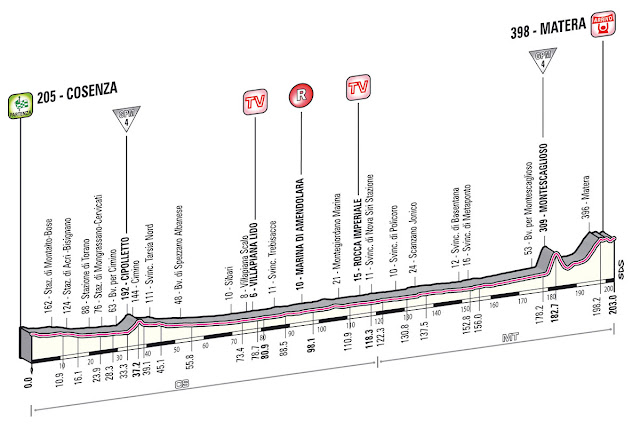 For the third day in a row, we have an undulating stage ahead of us. It’s another stage of more than 200 km and like the previous two, the first long stretch is flat before two climbs near the finish. The first one, Montescaglioso is only a category 4 climb but its 4.5 km with an average gradient of 5,6% - and parts of 10% - will thin out the peloton before the final.

In 2003, Marco Pantani attacked on Montescaglioso but despite a strong effort from the Italian legend, which made most of the sprinters lose ground, it all ended up in a bunch sprint. The profile of this stage looks a lot like the one the Giro organizers used 10 years ago and don’t be surprised if it ends in another sprint despite the hilly finish.

The final climb isn’t very steep and strong sprinters with a bit of climbing legs like Degenkolb, Ventoso and Goss should put their teams in front and try to drop some of the pure sprinters. The climb ends with 4.8 km to go and from here on it’s straight out with a bit of descending before the last kilometer kicks up with 2.8% all the way to the line. GreenEdge and Argos-Shimano both saved energy on Stage 4 for this stage and this could very well end up with a fight between Goss and Degenkolb.

This is also a great finish for riders like Pozzato, Felline, Gatto and Battaglin. Originally, I had Enrico Battaglin down for a “joker” spot on this stage but after his impressive win on Stage 4, I doubt he can be considered a joker anymore. These kind of climbs aren’t too tough for the young Italian and everybody saw how fast he is on the line Tuesday afternoon. Teammate Sacha Modolo might fancy this stage too and together with Battaglin, Bardiani really have a very strong duo for Stage 5.

The way I see it, the final climb isn’t hard enough for the favorites to test each other and with only a few sprint stages this year, the sprinters’ teams should be able to keep it together. Quickstep will probably try to take the lead in order to keep a pace Mark Cavendish is comfortable with, but Stage 6 seems like a better option for the Manxman. That being said, of course Cavendish will do everything he can in order to take another stage win as soon as possible. McEwen crossed the line first back in 2003 and if Cavendish can get back to the peloton after Montescaglioso, he’s the man to beat.

It’s not easy picking a favorite for a stage like this one. A break getting away on the final 10 km could easily make it to the line, but if teams like Movistar and Bardiani don’t have anyone in the break, it will probably end like in 2003. Still, the chances of Movistar being in the break are not bad. Giovanni Visconti is gunning for the Pink Jersey and even though he’s 52 seconds down, a 20 seconds time bonus for winning would bring him close if he gets away from the peloton.

Lampre haven’t had much luck so far in this Giro d’Italia. Roberto Ferrari was caught behind the crash on Stage 1, they had problems staying together in the TTT and then Michele Scarponi crashed on Stage 3. Their luck could change on this stage if Filippo Pozzato has a good day. Pozzato showed great shape in Tour of Turkey and after a disappointing Spring Season, he now has a chance to take revenge.

I promised you something extra for the Giro previews this year and here it is. In collaboration with GNC, you’ll find a short video preview of each stage of the race. Here is Stage 5:

For live coverage of the stage check out steephill.tv
Posted by Mikkel Condé at 10:38 PM