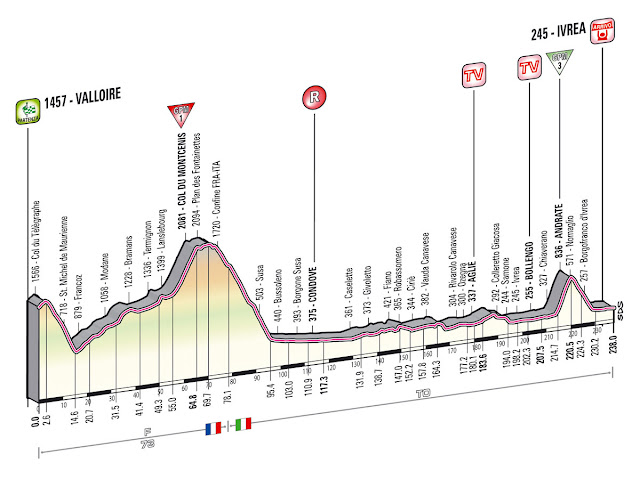 On paper, this looks like a good stage for another breakaway to make it all way. Giovanni Visconti managed to keep the favorites behind him on Stage 15 and despite a tough climb towards the end, I think a break will make it again.

The stage starts with a 12 km descent from Télégraphe before the riders take on Mont Cenis, this time from the side the descended on Stage 15. That means the climb is only 10 km long but it still has an average gradient of 7%. The race got neutralized on Mont Cenis last time but hopefully we will get to see attacks from the very beginning this time. Stefano Pirazzi & Giovanni Visconti now leads the fight for the blue KOM jersey and even though both must be tired from Sunday’s effort, they need to stay alert and maybe attack again. Actually, looking at the stage profile, this is another very good stage for Visconti. If he’s ready again, he could make it two in a row.

Team Colombia and Androni have been very active, especially in the mountains, and with both Jackson Rodriguez and Robinson Chalapud fighting for the KOM jersey, I would imagine them to ride aggressively again on this stage. Rodriguez hasn’t been getting much out of his efforts so far in the race but if he manages to get in the morning break, this could be his big day. He’s very strong uphill and also fast on the line in a reduced group.

After the top of Mont Cenis, it’s downhill for 25 km before a flat stretch of 120 km. With 23.3 km to go the last climb of the day, Andrate, starts. It’s only a category 3 climb,but its 6.2 km have an average gradient of 8% and parts of 13% halfway to the top. There are 17.5 km to go from the top of Andrate and after a technical descent, the last 8 km are flat towards the line. The last few kilometers are tricky with sharp turns and parts of paves, so a lonely rider will have a good chance of making it all the way with a small gap on the final kilometers.

As said in the beginning, I think this is another day for a breakaway. It’s difficult to pick a favorite for a stage like this one, but looking at the last few days in the mountains I see many of the Movistar riders with good legs. I’ve already mentioned José Herrada and Eros Capecchi a couple of times during this Giro d’Italia and I think this stage is perfect for both riders. Herrada has been attacking the last couple of days while Capecchi has been in the peloton looking after Beñat Intxausti. I’m sure both will try to get away on the Mont Cenis, and especially Capecchi will favor a technical descent before the line.

Team Blanco have launched ‘Plan B” after Robert Gesink lost his chances of a good overall place and they showed on Stage 15 that they are prepared to attack whenever they get the chance. Gesink, Kelderman and Garate all tried to get away on Galibier and I think it’s now time for Stef Clement to show the jersey. Clement has had a good Giro so far. He’s climbing very well and his fifth place in the time trial showed he’s in great shape. Blanco are eager to show their potential in the fight for a new sponsor and without a rider for the GC, Stef Clement can now try his luck on his own. It won’t be easy for him to drop strong climbers on Andrate but if he can hang on to the front, he can launch an attack on the flat part and then he’ll be difficult to catch.

Vini Fantini finally got their stage win with Mauro Santambrogio on Stage 14 and they will be eager to take another one. Danilo Di Luca is ‘only’ 14:44 minutes after Nibali in the GC and therefore I doubt the other teams will let him in the Top10 fight again with an early attack. Stefano Garzelli on the other hand is coming into shape and if he’s up for it, he could be a dangerous outsider for the stage win. The same goes for Oscar Gatto, even though I think the climbs are too tough for him. Still, should it all come down to the last climb, Di Luca is a good pick for the win.

There aren’t any favorites for stages like this, so instead of tipping ‘Favorite’ and ‘Top3’, I’ll leave you with these riders as my personal picks for the stage win.

I promised you something extra for the Giro previews this year and here it is. In collaboration with GCN, you’ll find a short video preview of each stage of the race. Here is Stage 16:


For live coverage of the stage check out steephill.tv
Posted by Mikkel Condé at 8:56 PM