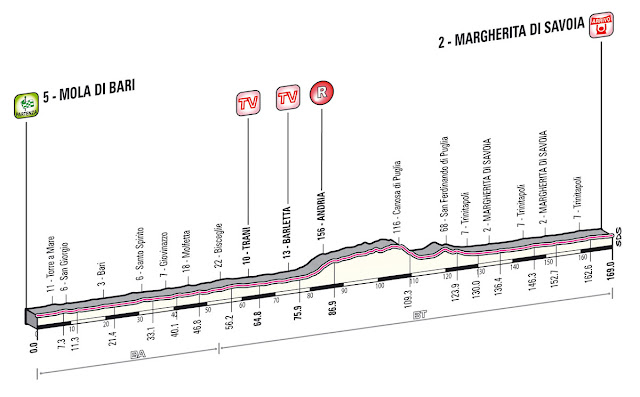 After three tough days, it’s now time for the sprinters. It’s a short stage, only 169 km, and it’s pancake flat. Pure sprinters like Mark Cavendish, Mattia Gavazzi and Francesco Chicchi have had some very difficult days on the bike, but now they have a chance to get their saying. Especially Chicchi and Gavazzi will be eager to get a good result after they both crashed on Stage 1.

The stage ends with two laps of 16.3 km in Margherita di Savoia. Stage 5 ended up in a big crash in the last corner with 1 km to go, but with the last three kilometers straight out this time, we should get a regular power sprint with all the big leadout trains lining up their guns.

Mark Cavendish is the big favorite. He showed on Stage 1 that he wins just as easily with a broken leadout as he does when everything goes smoothly, and it’s difficult not to see him winning this stage too. He will be able to rely on Steegmans and Trentin for the final leadout and even though Argos, GreenEdge or Cannondale ends up in front with 1 km to go, Cavendish still has a kick a level or two above the rest.

Being a power sprint, naturally John Degenkolb and Elia Viviani will have a good chance with their strong leadout trains. Still, I think guys like Nacer Bouhanni & Mattia Gavazzi will have a solid chance of taking Top3. Bouhanni didn’t look good on Stage 3 and 4, but he was right up in the mix on Stage 5 before getting hold up by the crash. The French champion is a former boxer and he shows that on the bike too when fighting for the right wheel in the sprint. Bouhanni doesn’t have the same kick as Cavendish, but he’s very fast on the final meters and he can now turn his frustration from Stage 5 into motivation for Stage 6.
For Stage 1, I picked Giacomo Nizzolo for a spot in Top3 - he ended 4th - but allergies could prevent the fast Italian from being at his best. The weather forecast shows a sunny day in the saddle and riders suffering from allergies like Nizzolo and Phinney won’t have it easy in such a power sprint.

The first sprinter to get dropped on Stage 5 was Mattia Gavazzi. He knew the climb was too steep for him and he didn’t even try to hang onto the peloton when he lost ground. Gavazzi is in great shape right now and I think he will give Androni another podium spot in this year’s Giro d’Italia in this stage. Gavazzi believes he has the speed to beat Mark Cavendish right now, and even though I won’t say the same, I do believe he will put up a good fight.

It’s difficult to pick a joker for the sprint stages this year since all the sprinters in race are solid Top3 candidates. Instead, I would like to point out Edwin Avila. The young Colombian isn’t well known - yet -  but I think he can surprise a little in this Giro. I’m not saying he’s going to win a bunch sprint, or even making Top3, but he can definitely aim for a place in Top10. Like many others, he didn’t get a chance to test his legs on Stage 1 due to the crash, but he was in the wheel of Chicchi (in the wheel of Cavendish) and that shows he’s ready. Teammate Leonardo Duque will probably also try to get in the mix and together the two Colombians should be able to get a good result for the team.

I promised you something extra for the Giro previews this year and here it is. In collaboration with GNC, you’ll find a short video preview of each stage of the race. Here is Stage 6:

For live coverage of the stage check out steephill.tv
Posted by Mikkel Condé at 9:11 PM