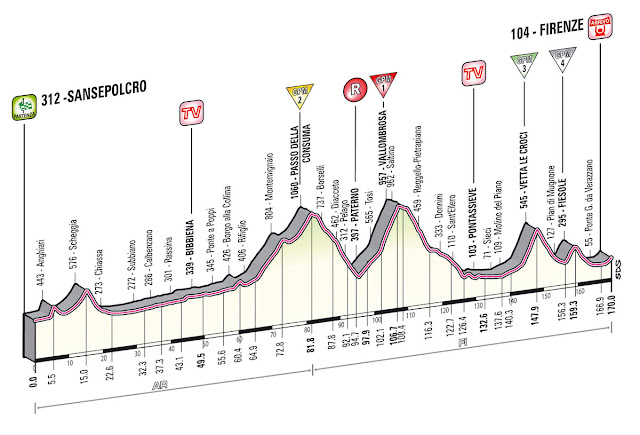 This stage looks like a dress rehearsal for the World Championship in Florence later this year and like Stage7, this one has ‘breakaway’ written on its forehead. The route takes place in Giovanni Visconti’s backyard and with four categorized climbs, the Italian will be eager to both keep his KOM jersey and win the stage. As always, it’s difficult to talk about favorites for stages like this one but to me, Giovanni Visconti is the man to beat.

Vini-Fantini put in an amazing amount of work on Stage 7, but instead of closing the rest of the gap - they got it down form 7 min to 1½ min - they attacked with Taborre who already had been working in front of the peloton. Not exactly the smartest tactical choice by Luca Scinto’s team but I’m sure they are now ready for revenge. Danilo Di Luca, Mauro Santambrogio and Matteo Rabottini are all very good on these kind of stages and especially Di Luca looks very strong right now.

The last climb of the stage, Fiesole - which is also on the World Champions course - is only 2.9 km short but its average gradient of 5.7% and 11% in the beginning will serve as an excellent place to attack. There are only 10 km to go from the top of Fiesole and it’s a technical run-in to the line from here. The last 1700 meters kick up with 3% and after three tough days in the saddle, it’s important to have something left in tank for the final meters.

I picked Miguel Angel Rubiano Chavez as my joker for Stage 7, but since Emanuelle Sella made the break rather quickly, Rubiano never got to place his hand. Instead, he has been waiting for this stage and I’m sure he will be eager to finally make the right breakaway. Rubiano is very strong uphill and he’s fast on the line too. The stage he won in the Giro last year is similar to this one and since Androni seem to be represented in every breaks this year, the chances of Rubiano hitting the right break are not bad at all.

Stefano Pirazzi is another good joker for this stage. He’s targeting the KOM jersey and with the four KOM sprints on the menu, Pirazzi knows this is a great day to attack. He hasn’t had much luck with his late attack so far in the race, but now he’s 7:49 down in the GC and no longer an imminent threat to the Pink Jersey. Still, Pirazzi needs to get away alone in order to win this stage since his not very fast in a sprint. Bardiani also have Enrico Battaglin, should the break be caught, and if they don’t manage to put a man up front, we will see them work hard for the Young Italian.

Many will be looking forward to the rest day on Monday but I doubt we will get a quite stage to watch. There are still plenty of opportunities to attack and with Bradley Wiggins having troubles on the descents, surely his rivals need to see if they can take even more time on him before the mountains. I doubt Vini-Fantini will miss the break this time and if they, Androni and Bardiani all get a man in the morning break, it will most likely make it to the line.

Also, look out for Eros Capecchi. He came to the Giro with big ambitions, but allergy problems knocked him out early in the race. The last couple of days have been better for him and this is a stage he has been targeting for a while. Capecchi is good uphill, uphill and he's fast. If he's having a good day, he could very well end up giving Movistar their second stage win in a row.

I promised you something extra for the Giro previews this year and here it is. In collaboration with GNC, you’ll find a short video preview of each stage of the race. Here is Stage 9: