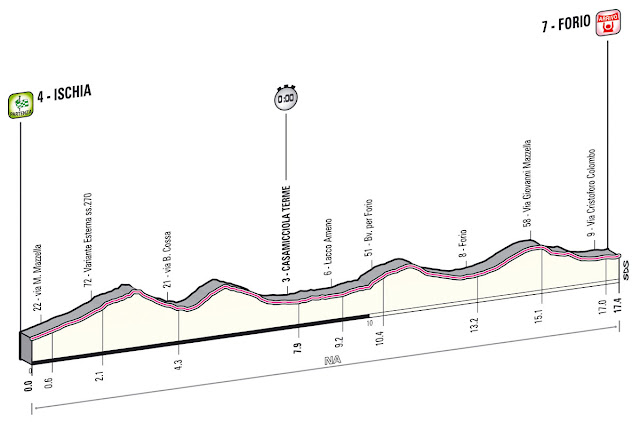 The team time trial is the first fight between overall contenders in this year’s Giro d’Italia. Team Sky and Bradley Wiggins will be eager to get an advantage early on, but Astana and Vincenzo Nibali showed in Giro del Trentino that they won’t lose much time. Losing 1 sec per kilometer (as it was in Trentino) is definitely acceptable for Astana and I wouldn’t be surprised if they even do better than that.

It’s a short team time trial of only 17.4 km but it does have some nasty parts, especially towards the end. The last climb kicks up with 7% in the beginning and the final descent is very technical with many turns and a short tunnel heading into the last kilometer. It’s essential to know the course well in order to win this stage and that is also why I don’t pick GreenEdge as my favorite. On paper, the Australian team bring the best time trial squad but for they haven’t had time to train on the course. Had it been a typical flat time trial, they probably would have won anyway but with this undulating route and technical descents, I doubt they will set the best time.

The way I see it, Team Sky should be strong enough to win this team time trial. They won in Trentino without an important rider like Rigoberto Uran and even though the competition is stronger here, they still have a great team. Especially Wiggins and Cataldo will be able to pull hard and knowing Wiggins has to gain as much time as possible in these disciplines, they should be properly motivated too.

Garmin with Ryder Hesjedal are another strong contender for this stage. They won the team time trial last year but are now without Alex Rasmussen and Sebastien Rosseler who did a lot of work back then. Their replacements - David Millar and Thomas Dekker - should be able to do just as well though and a stage Top3 without Garmin will be a big surprise.

My personal joker for this stage is Blanco. People seem to forget about the Dutch team when talking about the contenders for the TTT, but I have a feeling they will surprise and maybe even make Top3. Robert Gesink aims for the overall podium and in order to achieve that, he has to do well against the clock. Gesink has already shown to be strong in the time trials and together with specialists like Clement, Kelderman and Bobridge, Blanco have a very good team for this stage.

I would also like to mention Team Saxo-Tinkoff. They took 3rd place in team time trial last year and bring an even stronger team this time. Manuele Boaro and Mads Christensen have been showing outstanding shape the last weeks and together with Daniele Bennati, they should be able to put in another good performance. The Danish team hope to put Rafal Majka in the Top15 overall and it would be a great confidence boost for the whole team if they do well in this stage.

I promised you something extra for the Giro previews and here it is. In collaboration with GNC, you’ll find a short video preview of each stage of the race. Here is Stage 2:

For live coverage of the stage check out steephill.tv
Posted by Mikkel Condé at 9:27 PM