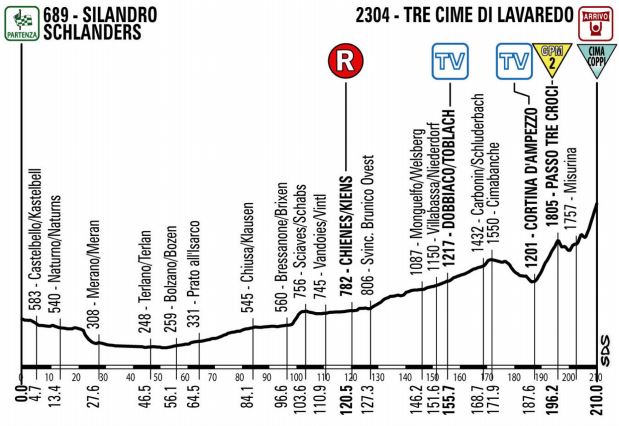 Stage 19 got cancelled completely and that means this is the last chance to change the overall classification. Vincenzo Nibali seems sure to win this Giro d’Italia but the final two spots on the podium are still up for grab.

Unfortunately, this stage too has been modified a lot and the first three big mountains have all been cancelled due to the bad weather. This leaves us with a 210 km long stage with only the final 25 km are kept as planned. A strong morning break over the big climbs would have had a good chance of making it to the line but with this new profile it all comes down to the final climb up to Tre Cime Di Lavaredo.

The first 187.6 km aren’t very challenging but hopefully we will get to see fire some firework already on the first climb up to Passo Tre Croci. This category 2 climb has a steady 7% gradient all the 8 km to the top and if the morning break hasn’t already been caught, this is a good place to finally rail them back in. As I wrote in the preview for Stage 19, I would like to see Lampre take charge and play out Niemiec early on. If he attacks on Passo Tre Croci, it would force BMC and Sky to work hard and without a strong team, Evans would quickly be isolated.

There are about 7 km from the top of Passo Tre Croci to the final climb begins. It starts with a steep kilometer of 10.6% with parts of 18%. Then there is short descent before the final 3 km kicks up with an average (!) gradient of 12.4%. There are parts of nearly 20% with two kilometers to go and the tiny climbers like Sergio Henao, Carlos Betancur and Domenico Pozzovivo will have a big advantage here.

The only leader’s jersey still up for grab is the White Jersey and with only two seconds between Rafal Majka and Carlos Betancur, we should be in for a great show on this final climb. Majka seems to flying right now but these steep percentages surely favors Betancur more than the strong Pole. I would imagine Domenico Pozzovivo to attack first and make the other riders work for the stage win. If they then catch Pozzovivo, Betancur will be ready to counter. Just like we saw it on the stage Uran won earlier in the race.

Samuel Sanchez came close the other day and he's still chasing a stage win that will see him join the club of stage winners in all the three Grand Tours. The steep final part isn't really in Sanchez' favor but he does seem very strong right now and he's always good in the last week.

This being the last mountain stage of the race, I doubt a morning breakaway will make it. The fight for second and third place overall are still so close that every bonus second count and Betancur also knows that he is faster than Majka on the line. Even if Betancur can’t drop Majka on the climb, he can still outsprint him and the take bonus seconds he needs.

Many odd things have already occurred in this Giro and of course, it’s not impossible a morning break will make it. Androni have been in all the major breaks in this Giro d’Italia and I would expect riders like Jackson Rodriguz and Miguel Angel Rubiano to try again. Franco Pellizotti still aims at Top10 overall and with nothing to lose I think he will try to attack early on Passo Tre Crocil.

Movistar have been extremely strong the last week and even though their most important task now is to secure Beñat Intxausti’s Top10 place, I’m sure they will try to take their fifth stage win. Eros Capecchi, José Herrada and Juan José Cobo are all good contenders for an early break and I think at least one of them will make it.

Last, I need to mention Team Colombia. They came to the Giro with high hopes for this final week but with all the big mountains being cancelled out, they haven’t really had a chance to show their strength. Darwin Atapuma is getting better and better and so is Fabio Duarte. The little Colombian have been attacking non-stop the last couple of days and I’m sure he will try again on this stage. Duarte is good on the steep percentages and together with Atapuma, Colombia have a dangerous duo for the final climb. Also, the Colombian Sports Minister, Andres Botero, will join the team for the final two stages and if the riders weren’t motivated enough already, this should give them the extra edge.

I promised you something extra for the Giro previews this year and here it is. In collaboration with GCN, you’ll find a short video preview of each stage of the race. Here is Stage 20:


For live coverage of the stage check out steephill.tv
Posted by Mikkel Condé at 8:58 PM