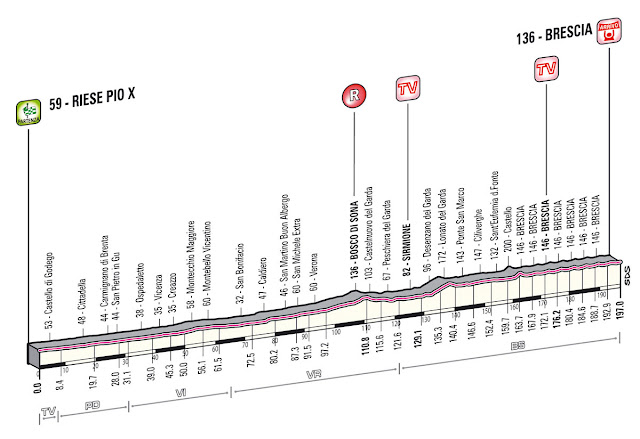 It’s time for the last stage of this year’s Giro d’Italia and everything but another bunch sprint will be a huge surprise. Mark Cavendish lost the Red Jersey to Vincenzo Nibali on Stage 20 and that means he needs a top performance if he wants to take it back on the last day. Cavendish has been levels above his rivals so far and it seems that only bad luck can take this stage win away from him.

Still, the final laps of 4.2 km in Brescia are very tricky with a lot of sharp corners and with everybody wanting to win on the final day; it could easily end up with another big crash. Naturally it’s up to Quickstep to keep it together but don’t forget Cavendish is without leadout man Gert Steegmans, so he probably have to rely on youngster Matteo Trentin or get on the wheel of another train.

Nobody can match Cavendish’ kick in the final but if someone tries to open the sprint early, Cavendish might be in trouble without a leadout train. I personally think Mark Cavendish will win this one but with a tricky finish and no leadout, it won’t be as easy as earlier.

Cannondale are one of the few teams with all nine riders still in the race and they will be extra motivated for this stage. The team is based nearby and after being close a couple of times already, Elia Viviani now hopes to finally take a stage win in this year’s Giro d’Italia. I expect Cannondale to take the front on the final kilometers and I think Viviani will be very close again.

I have already said many times that it’s hard to pick a joker in this sprint field but since we haven’t seen much of him so far, I’ll pick Manuel Belletti. The Italian sprinter went down in the big crash on Stage 1 but he’s been near the top the last couple of sprints. Belletti has been good at getting on Cavendish’ wheel this season but for some reason he hasn’t been able to turn into a result. I’ve seen Belletti getting better and better in this Giro and I wouldn’t be surprised to see him make Top3 in Brescia.

I promised you something extra for the Giro previews this year and here it is. In collaboration with GCN, you’ll find a short video preview of each stage of the race. Here is Stage 21:


For live coverage of the stage check out steephill.tv
Posted by Mikkel Condé at 8:17 PM