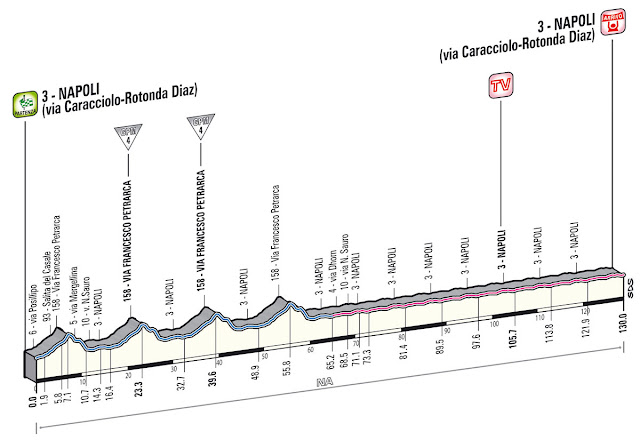 For the first time in 10 years, the Giro starts with a regular stage. Last time that happened Alessandro Petacchi won and took the first Maglia Rosa and everything but another bunch sprint will be a big surprise.

The sprinters won’t have many chances in this year’s Giro d’Italia and this one is certainly one they don’t want to miss out on.

The stage is only 130 km long and it’s split up into two difference loops. The first one includes the category 4 climb Posillipo on Via Francesco Petrarca and is covered four times within the first 55 km. There is a KOM sprint placed on the top of Possillipo the 2nd and 3rd time the riders cross the top so expect fireworks right from the beginning of the stage. The smaller teams and those without GC riders or sprinters will be eager get in the break and take the KOM jersey on the first day of the Giro.

After looping on the Posillipo Hill four times the riders head back to Napoli and start on eight laps in the city. The last 6 km are tricky with many bends and corners but the last 2 km seem pretty straight forward. Argos-Shimano, GreenEdge, Cannondale and Quickstep will all try to hit the front the last few kilometers and with everybody having fresh legs - and thinking of Maglia Rosa - it sure will be hectic.

Usually Mark Cavendish doesn’t win on the first day of a stage race, but being Cavendish he still is the big favorite. He didn’t get Alessandro Petacchi as leadout for the Giro and that means it’s up to Trentin and Steegsmans to deliver Cavendish on the right wheel - not leading him out, delivering him. Note the difference! Cavendish decided to go to Tour de Romandie, a stage race without any mass sprint finishes, in order to get ready for the Giro and I wouldn’t be surprised if he needs a stage to get 100%. That being said, I wouldn’t bet against him either.

The way I see it, there are three sprinters on the same level just behind Cavendish. Matt Goss, John Degenkolb og Nacer Bouhanni. Goss and Degenkolb probably have the two strongest leadout teams in the race since and I think it will be a fight between GreenEdge and Argos-Shimano to take the front on the last kilometer. Seeded in the third group on my paper we’ll find Roberto Ferrari, Elia Viviani, Sacha Modolo and Giacomo Nizzolo. My personal favorite in this group is Nizzolo. He’s getting better and better every year and it won’t be long before he’s beating the big favorites in the mass sprints. Nizzolo doesn’t need a leadout train and while everybody is looking at Cavendish, Goss and Degekolb, I wouldn’t be surprised if Nizzolo made top3 in Napoli.

Also, look out for Francesco Chicchi. He didn’t impress much in Tour of Turkey last week but he is an expert in these short criterium stages. You normally never see Chicchi until the final 50 meters, but he has a strong kick and high top speed. If anyone can make an upset and snatch Maglia Rosa from the favorites it’s Chicchi!

Get live race updates and more predictions by following me on Twitter @mrconde.

I promised you something extra for the Giro previews and here it is. In collaboration with GNC, you’ll find a short video preview of each stage of the race. Here is Stage 1:

For live coverage of the stage check out steephill.tv
Posted by Mikkel Condé at 12:46 PM