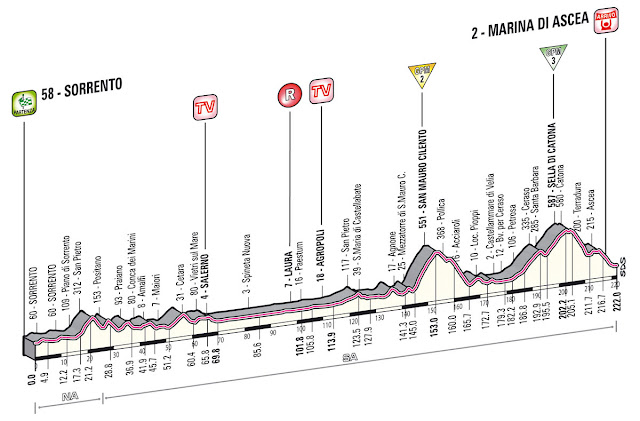 We are only on stage three of this year’s Giro d’Italia, but it’s already time for the opportunistic riders to try their luck. The pure sprinters will have troubles staying up front on the 222 km from Sorrento to Marina di Ascea, especially on the last 80 km with a couple of climbs on the menu.

The first 140 km are relatively flat and a break should have no problems getting clear here. With 77 km to go the first climb, San Mauro Cilento, starts. Its 8 km with an average gradient of 6,5% will make it tough for the sprinters to stay in the peloton. Still, there are about 30 km from the top of San Mauro Cilento until the next climb starts. Sella di Catona stretches over 20 km but is separated by a short descent in the middle. The two uphill sections both have an average gradient of about 4% but the climb does kick up towards the top with parts of 7%.

There are only 20 km to go from the top of Sella di Catona and if a small group gets away over the top, they won’t be easy to catch. Like the climb, the descent too is split in two, with a short ascent in the middle. The last 8 km are downhill towards the line and strong descenters like Vincenzo Nibali and Samuel Sanchez may want to test Team Sky and try to gain a few seconds. Especially Samuel Sanchez must be eager to take back some time after Euskaltel got their TTT ruined by a punture with 1,5 km to go on Sunday. Don't be surprised if Sanchez attacks on the final 8 km towards the line.

Also, the last kilometer is very tricky. Coming down from the climb, there is a viaduct leading directly into a roundabout and this will stretch out the peloton a lot. After that there is a 90° left turn with just 400 meters to go. It won't be easy to gain positions on the descent, so you need to be among the first riders over the last top if you want to win this stage.

I think many of the pure sprinters like Chicchi, Viviani & Cavendish will have troubles on final hilly 80 km of the stage. Teams like GreenEdge and FDJ should try to set a high pace to thin out the competition for Goss and Bouhanni. Still, I wouldn’t be surprised if a break makes it to the line. The stage profile reminds me of the stage Angel Vicioso won in 2011 when a small group got away over the top of the last climb before the downhill finish. Vicioso is in the race again this year and he seems to be in great shape right now. He’s definitely a rider to look out for in the final. The same goes for aggressive riders like Giovanni Visconti and Filippo Pozzato. Visconti took the KOM jersey on stage 1 and I’m sure he will be keen to hang on to it for a while. The former Italian champion is a real specialist on these kind of finishes and he can’t be given too much of a gap towards the end. Also, Giovanni Visconti is only 9 seconds after Salvatore Puccio in the overall classification, so a stage win will put him in Maglia Rosa!

Another rider this stage finish is perfect for is Fabio Felline. The young Italian has a huge potential. He’s getting stronger every year and he won’t have any problems on these kind of climbs. Furthermore, Felline is very fast on the line. He’s not a sprinter, but he in a group of 40-50 riders, there aren’t many who can beat him. The way I see it, Fabio Felline should be named as one of the favorites for this stage. He can both attack in the end and win a sprint in a reduced group. On Stage 1 Felline punctured in the final and in team time trial he had to change bike. If he can avoid more bad luck, I think Felline will be close to Top3 no matter how this stage evolves.

Personally, I would like to see Marco Marcato and Oscar Gatto try something on this stage. Marcato came out of the Ardennes Classics in great shape and he’s now eager to get his first win of the season in his debut Giro d’Italia. Marco Marcato has his eyes on a different stage in this race - more on that when time - but with his fast finish and strength on the hills, this stage too seems very good for him.

Last year Oscar Gatto arrived to the Giro a bit tired after a strong season start, but this year he seems to have timed it differently. As mentioned earlier, I doubt Chicchi can make it over the climbs so Vini-Fantini have to put their faith in other riders. Luckily for them, they bring a whole team of riders for these kind of stages. Di Luca, Rabottini, Taborre, Garzelli and Gatto all have the abilities to win on a finish like this but I think Gatto is their best card to play. He’s aggressive, good on the hills and very fast on the line.

As you probably gather from this Preview, it’s difficult to pick a favorite for a stage like this. It sure looks like a stage for a breakaway, but both Nacer Bouhanni and Matt Goss have the strength to make it over the climbs and therefore I guess one of those must the favorite. I pick the French champion.

I promised you something extra for the Giro previews this year and here it is. In collaboration with GNC, you’ll find a short video preview of each stage of the race. Here is Stage 3:


For live coverage of the stage check out steephill.tv
Posted by Mikkel Condé at 8:54 PM