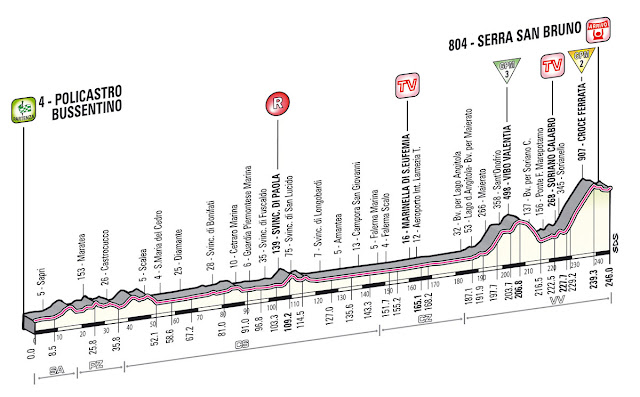 Stage 4 is another very long day in the saddle, 244 km in total, and one could argue that the first - flat - 190 km are a bit too much. Anyway, like on Stage 3 a break will most likely get clear early on and the stage won’t really get interesting until the last 50 km.

This is where the category three climb, Vibo Valentina, starts with an average gradient of 6% the first couple of kilometers before it evens out a bit. After a ‘flat’ part, the climb kicks up with 6-7% towards the top. There are still 40 km to go from the top of Vibo Valentina but only 20 km to the beginning of the final climb, Croce Ferrata. This category 2 climb stretches over 12 km with an average gradient of 5.6% and parts of 10% in the middle. There are 6.7 km to the finishing line from the top of Croce Ferrata and it’s not impossible that a small group of even a single strong rider can keep the peloton at bay if they get a gap over the top.

The first 3-4 km are downhill on narrow and twisting roads and with 3 km to go the road kicks up for about 500 meters. The last kilometer is flat but narrow roads and parts of paves is definitely in the favor of a break making it to the line.

Stage 3 showed us that Ryder Hesjedal means business in this race. He wants to win overall with number 1 on his back and he really animated the race both uphill and downhill. While everybody else was struggling Hesjedal said he didn’t even find it hard. The final climb on Stage 4 may not be hard enough to make a real selection but if Hesjedal and others want to shake Team Sky - who didn’t seem to be in control in the final on Stage 3 - they may try attacking again. The possibilities of a break making it are not bad, but it’s clear to everyone that the GC contenders won’t wait to the big mountains before testing each other. Therefore, I think one of the team leaders will take the stage win in Serra San Bruno.

Except for Ryder Hesjedal and Vincenzo Nibali, Mauro Santambrogio looked very strong on Stage 3. He didn’t make the cut when Garmin first attacked with three riders, but he quickly bridged the gap all by himself. Santambrogio also made it to the front when Hesjedal attacked on the downhill section with Paolini and Agnoli and to me, Mauro Santambrogio is the big favorite for this stage. He has been in outstanding shape since Tirreno-Adriatico - two months ago - and as I fear he may fade out in the last week, he needs to get his stage win soon. There aren’t many riders who can drop Santambrogio uphill these days and since he’s fast on the line too, I feel confident picking him as my favorite.

On paper, this stage looks perfect for Paolo Tiralongo. He’s strong uphill and also very fast in a reduced group. Unfortunately, Tiralongo crashed on Stage 3 and hit his knee, and I’m sure he will be more concerned about healing up before the mountains than attacking with a sore knee this early in the race. Instead, look to Domenico Pozzovivo. He won a similar stage in last year’s Giro (the stage to Lago Laceno) after he attacked and got away on the final climb and he knows this stage finish very well. Pozzovivo is already 1:41 min down in the general classification and even though the favorites know that they can’t let him get too much of a gap, he probably won’t the first rider they’ll chase down.

Teammate Carlos Betancur is at the same time in the GC and like Santambrogio, Betancur has also been in good shape for a while now. I think he will manage to stay sharp the whole Giro, but naturally he should target a stage win if he gets the chance. Betancur was one of the many riders crashing on Stage 3 but he seems to be okay. He has a kick uphill like few riders right now and even though there are still 6,7 km to from the top, he could make it all the way on a good day.

Luca Paolini will most likely lose the Pink Jersey already on this stage and that means Bradley Wiggins will take the lead unless one of his nearest rivals win. Katusha have been doing great so far in this race and even though Paolini loses the jersey, they may just keep it anyway. Confused? Let me explain. Giampaolo Caruso has been in great shape the last month and this is a very good stage for him. He’s not afraid of attacking from far out and Team Sky would definitely not mind not having the jersey for another day. The morale is high on Katusha these days and Caruso could be joker prolonging the champagne days for the Russian team.

Another good joker for this stage is Stefano Pirazzi (who also crashed on Stage 3, but without injuries). He showed in Giro del Trentino that he is in great shape now, but he didn’t manage to be up front when Garmin started their surprise attack. Pirazzi crossed the line just behind the big group almost 2 minutes after Luca Paolini and that means he’s now free to do what he does best: attack! Bardiani-CSF don’t have a rider for the overall classification but Stefano Pirazzi is their best card to play uphill. He’s aggressive, persistent and he never gives up. Pirazzi is already 2:45 down in the overall classification and the favorites won’t mind him getting away on the final climb.

Like Stage 3, this is a very difficult stage to predict. Riders like Weening, Santaromita, Visconti, Sarmiento and Duarte are all good jokers too, but I think I will stick with the ones already mentioned.

I promised you something extra for the Giro previews this year and here it is. In collaboration with GNC, you’ll find a short video preview of each stage of the race. Here is Stage 4:

For live coverage of the stage check out steephill.tv
Posted by Mikkel Condé at 10:20 PM