UPDATE: Due to snow, Sestriere too has been cancelled. That means this is the new stage profile. Naturally, the chances of a break making it are now not that great since many riders in the peloton will arrive to the final climb with fresh legs. Still, if the morning break has the right combination of teams, it could make it all the way. 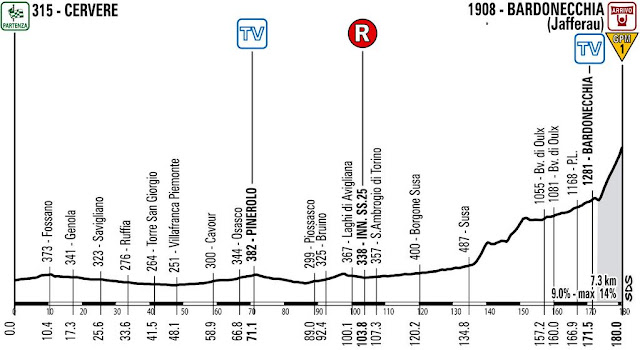 Original Preview:
This is only the second big mountain stage of this year’s Giro d’Italia and we have already said goodbye to two of biggest favorites. Ryder Hesjedal and Bradley Wiggins are now focusing on the Tour de France but we still have many strong riders left in the race and we should be in for another great day of racing.

The stage is only 156 km but almost 50 of these are uphill. The first long drag toward the top of Sestriere is 38 km long and despite an average gradient of just 3.8%, the peloton won’t be very big reaching the top. The last 5 km kick up with an average gradient of 5% and includes parts of 9% as well. I would expect a breakaway already to be ahead at this point and Stefano Pirazzi will most likely be in it.

There are 24 KOM points up for grab on this stage and that means that if Pirazzi misses the break, other riders will get right into the fight for the Blue Jersey. As I’ve said a couple of times already, Vincenzo Nibali and Astana won’t be eager to catch the break. They will be happy if a breakaway can take the 20 bonus seconds on the line since Nibali seems to be the strongest rider in the race anyway. Vini-Fantini will be eager finally to take a stage win and even though Mauro Santambrogio seems like the best card to play, I think Stefano Garzelli will have his saying too.

Before this Giro started, Garzelli told me he was aiming at this stage, and the Italian veteran has been looking very good the last couple of days. He knew he needed a week or so to get into the right shape and the last lumpy stages, Garzelli has been very active trying to get into the right breakaway. It hasn’t been successful so far, but Stefano Garzelli is a rider who always delivers when needed. Furthermore, Garzelli still hopes to win the KOM jersey for this 3rd time in his career and I’m sure he will show himself this weekend.

Androni have been in all the big breakaways this Giro d’Italia and I would be surprised not to see them put a rider or two in the morning break on this stage. Franco Pellizotti is still too close in the GC for the other favorites to let him get away early, but riders like Miguel Angel Rubiano and Diego Rosa are both out of the GC. Rubiano hasn’t had much luck so far in the race and this could be the day he finally shows his talent in the mountains.

It won’t be easy for a breakaway to make it all the way to the line, but if Vini-Fantini have a rider in it, I can’t see which teams should start chasing them down. Maybe AG2R if Pozzovivo and Betancur are feeling good, but I seriously doubt they have a strong enough team to do so. Lampre have a great team here and they could try to chase in order for Michele Scarponi to take back some time. The question is if Scarponi is strong enough to drop the rest of the favorites on the final climb? Right now, it doesn’t seem like it.

The final climb is only 7,25 km but it has an average gradient of 9%! It kicks up with 14% right in the beginning and the last 750 meters don’t drop below 11%. It’s an ascent for the pure climbers like Henao, Santambrogio, Pozzovivo & Betancur and if a break doesn’t make it, I think one of the two AG2R riders will take the stage win.

Domenico Pozzovivo tried to get away the other day but he couldn’t catch Uran. Betancur then counterattacked his teammate but according to himself, Betancur didn’t want to catch his friend up front. He might have able to and if he has the same legs on this stage, I think Betancur will be difficult to beat. The strong Colombian is still chasing his first victory this season and after two second places in this Giro already, it’s now time for him to get that stage win.

Also, look out for Team Saxo-Tinkoff's youngster, Rafal Majka. He's in great shape right now and not afraid of attacking. If GC contenders start looking at each other, I think Majka will be quick to take his chance.

I promised you something extra for the Giro previews this year and here it is. In collaboration with GCN, you’ll find a short video preview of each stage of the race. Here is Stage 14:


For live coverage of the stage check out steephill.tv
Posted by Mikkel Condé at 9:26 PM