As expected, a breakaway made it on Stage 14 and now the focus is back on the GC riders. This last week of this year’s Tour de France will be extremely tough and it starts out with a killer mountain stage finishing on the legendary Mont Ventoux.

The Route
In the past, the stages on the French National Day were made for the breakaways. This year it’s different. Stage 15 is the longest stage of this year’s Tour and despite finishing on Mont Ventoux, the first 221 km are more of less flat. This means it’s highly unlike a break will make it all way. It will be another hot day in the saddle with temperatures over 30°c and after two hard stages, many will hope for a quiet start of the day.

A tailwind will help a morning breakaway get a good gap but the peloton will make sure it won’t get out of control. The intermediate sprint is located in Malaucène 15 km from the bottom of Mont Ventoux. Since the stage hasn’t been very hard until now, most of the sprinters should be able to fight for points for the Green Jersey.

The Finish
The 20.8 km towards the top of Mont Ventoux have an average gradient of 7.5 %. The climb starts out quite soft with the first five kilometers not getting over 4-5 %. From here on the road really kicks up with percentages over 10 %. It’s always very windy after getting out of the forest into the moon landscape and this year is no different. The riders will be fighting a headwind and this will make it very difficult to attack and stay away alone. The last right hand turn towards the finishing line is the final struggle of the day and with more than 10 % you need to have something left in the tank if you’re not already alone in front.

The Favorites
The last time the Tour de France had a stage finish on Mont Ventoux, Juanma Garate won in front of Tony Martin after a long breakaway. Starting on Mont Ventpux, the break seemed doomed but since Andy Schleck didn’t want to attack without his brother, Fränk, the GC riders killed the stage and let Garate and Martin stay in front. I don’t think that will happen this year.

Chris Froome already has a good gap to his rivals and they need to take use of every opportunity they get. Froome’s rivals simply have to attack and gain time and everybody wants to win on this mythical climb. Chris Froome himself had his first - ever - rendezvous with Mont Ventoux just two months ago when he went to test his legs on the climb. Riders like Alejandro Valverde, Cadel Evans, Alberto Contador and Andy Schleck already know what to expect of Mont Ventoux and I think they will have a little advantage on Froome. However, it doesn’t help much if they can’t drop him uphill - and I don’t think they can.

The way I see it, Chris Froome is the big favorite for the stage win. He lost a minute to Contador and Mollema in the crosswind and I’m sure he will be eager to take back the lost time time and show who’s the strongest rider in the race. Team Sky are missing Vasil ‘Chloroform’ Kiryienka and Edvald Boasson Hagen but they still have David Lopez, Peter Kennaugh and Richie Porte to set the pace and keep Chris Froome in front. It’s not ideal but it has to do. If not Froome, I think the stage winner will be Spanish.

Movistar will most likely make the race hard but they only have Nairo Quintana for the overall classification. The Colombian super climber will probably put in a couple of strong attacks but I think Froome will respond. He knows can’t let Quintana get away. On the other hand, if Alejandro Vavlerde tries an attack I doubt Froome will chase him down instantly. Valverde has good memories from Mont Ventoux. In 2009, he took the yellow jersey in Critérium Dauphiné (which he later won overall) on the stage to Mont Ventoux. Back then, he ‘gave’ the stage win to Sylvester Szmyd but this time Valverde isn’t giving anything away. Tour de France was his big goal this season and he lost it all when a rider broke his wheel on Stage 13. Movistar are out for revenge and with a fast finish - should it come to that - I think Valverde will be tough to beat if Froome is just focusing on keeping the jersey. I wouldn’t be surprised if we end up with Froome and Valverde in front.

Also, look out for Andy Schleck. He’s getting stronger and stronger every day and he may have some unfinished business with Mont Ventoux from the last time he was here. The headwind won’t favor Andy Schleck but on a good day he could take another big stage win in the Tour.

The Jokers
The French riders will be eager to get something out of this Tour de France, especially on La Fête Nationale (Bastille Day). When the route was revealed Thibaut Pinot was my first pick for the stage win but now I’m not so sure. He seemed to arrive to the Tour in great shape but he had nothing in his legs in the Pyrenees. Lately he’s been getting better but apparently he has some kind of throat problems now. If he’s back at his 2012 level, he will be a dangerous outsider but I doubt it. Pierre Rolland is another strong French candidate and contrary to Pinot, Rolland seems to have great legs. A stage win on Mont Ventoux will help Pierre Rolland significantly in his fight to keep the Polka Dot Jersey and the other GC riders don’t have to worry about him. Rolland is 25:33 minutes behind Froome in the overall classification and he only focuses on stage wins and the KOM competition.

I have high hopes for Daniel Martin too. The strong Irishman has already won a big mountain stage in this year’s Tour de France and he’s been “saving bullets” for Mont Ventoux the last couple of days. Martin is 11th overall so he won’t be giving a card blanche. Still, he won’t be the first rider Froome, Contador and Mollema will start chasing down either. Daniel Martin says he’s a big fan of the cycling history and naturally winning on a famous climb like Mont Ventoux would be amazing. He seems to be in the shape of his life right now and he has a strong kick too. I don’t know if Daniel Martin still fits the “joker” category but if so, he’s my joker for the stage win.

So. To sum it up: Chris Froome is the strongest rider uphill but may not have the best team. Furthermore, his primary target is to keep the yellow jersey. Alejandro Valverde is eager to take revenge and his Movistar team is very strong. Valverde is now out of the GC and the other favorites won’t chase him down right away. Not even Belkin…

Just like during the Giro d’Italia this year, I once again have the chance to bring you daily “Fly Through” previews from Global Cycling Network. Here is Stage 15: 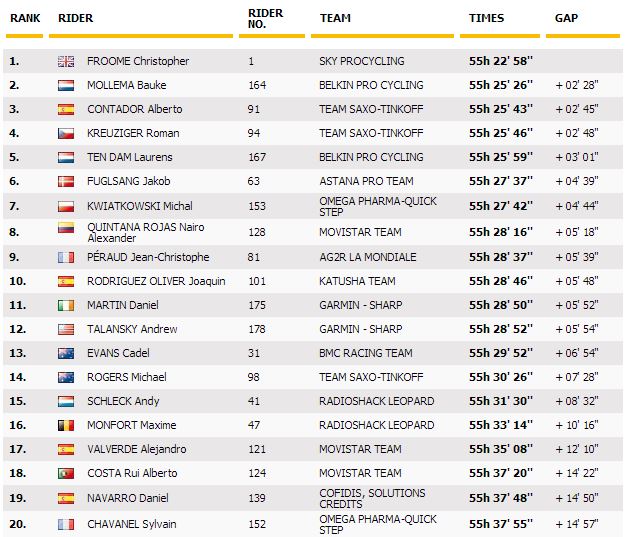 Just to get you into the right mood, take a look at the Mont Ventoux stage from 2000 when Marco Pantani won after an amazing comeback and series of furious attacks in the end: