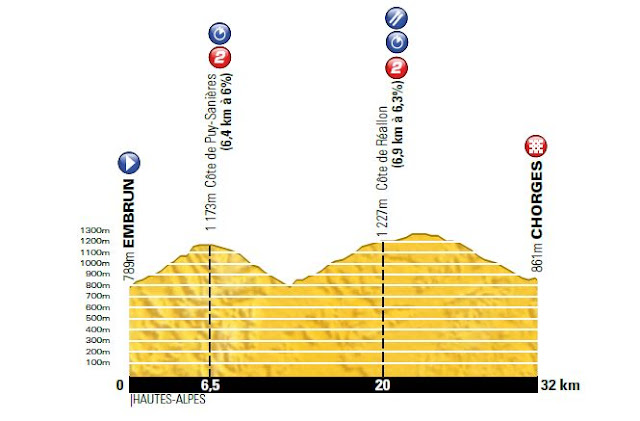 Everything went as expected on stage 16. A breakaway made it all the way and the GC riders gave us a good show on the final climb and descent. Despite the late attacks, the overall contenders didn’t burn too much energy and they will now have to use everything they have got left during one of the hardest time trials in recent Tour de France history.

The Route
This is another short time trial of only 32 km but that doesn’t make it easy, not at all! The riders face Côte de Puy-Sanières right from the beginning. This category 2 climb is 6.4 km long and has an average gradient of 6 %. It starts out with 5 % in the beginning and has parts of 9 % in the middle. The first time check is at the top of the climb and the last kilometers of 7 % will make it difficult to keep a steady rhythm. The descent is very technical and riders with good bike handling skills can really take back some time on his part.  Coming down from Côte de Puy-Sanières, the riders take on the next climb right away. The 6.9 km towards the top of Côte de Réallon have an average gradient of 6.3 % and it’s a lot easier to find into a good rhythm here. From the top of Côte de Réallon there are 12 km to go.

The Finish
The descent from Côte de Réallon is not as technical as the one from Côte de Puy-Sanières but after reaching the top and the second time check it actually takes a couple of kilometers before the riders starts on the downhill part. The final descent towards the line is very fast the riders should be able to reach a speed of about 80 km/h. The last kilometer is flat and it will be interesting to see if some of the heavier riders have been able to take back time on after the two climbs.

The Favorite
There is no “s” on Favorite this time since there is just one rider to beat if you want to win this stage. Only a strong headwind in the final kilometers kept Chris Froome from beating Tony Martin in the flat time trial and with two climbs on the profile, nobody will get even close to Froome. He’s the best rider uphill right now and even though some say he has difficulties on the descent, it’s not that bad. The only reason why he got off the bike on stage 16 was that Alberto Contador crashed in front of him. Actually, Froome did very well on the descent and he shouldn’t have bigger problems than other riders on this stage. Chris Froome knows he will be under attack in the Alps and he needs to distance himself from his rivals as much as possible before that. I think Froome will win this stage with at least one minute down to number two, probably even two minutes. The way I see it, it’s only the weather that can stop Chris Froome from destroying the peloton on this stage. As of Tuesday evening, there is 40 % chance of rain when Chris Froome takes the start and should it rain; the descents will be very difficult. In that case, look to riders down the GC starting early like national champions Lieuwe Westra and Jonathan Castroviejo.

The Jokers
After his outstanding time trial in Vuelta Pais Vasco, Nairo Quintana looks like an interesting rider for this stage. He’s fighting with Michal Kwiatkowski for the white jersey and he will need a very a good day in order to beat the Pole against the clock. Both are among the outsiders for a Top3 place and so is Bauke Mollema. The Flying Dutchman has never been better and he’s done very well in the time trials the last couple of years. He finished 11th in the flat time trial to Mont Saint Michel and in Tour de Suisse he took 3rd place in the final uphill time trial and made the overall podium. Mollema wasn’t great on Mont Ventoux and if he wants to keep his podium place, he needs another strong performance against the clock before the Alps.

Alberto Contador and Roman Kreuziger will most likely fight for a top3 place on this stage as well but I doubt the World Champion, Tony Martin will be near the top. He may do Top5 on a good day but I would be very surprised to see him near Chris Froome this time.

For live race coverage go to Steephill.tv and click here to see the starting order.

Just like during the Giro d’Italia this year, I once again have the chance to bring you daily “Fly Through” previews from Global Cycling Network. Here is Stage 17: