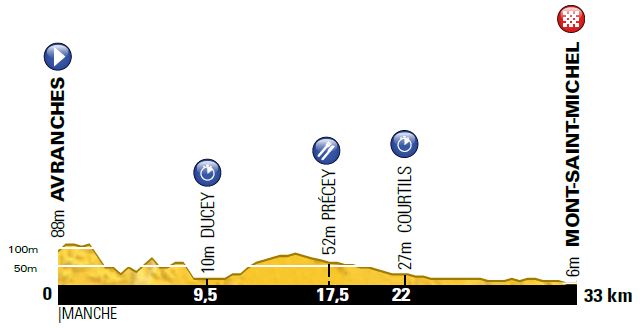 After a rest day and a stage for the sprinters, it’s now time to shake up the general classification again. The specialists have been trying to arrive as fresh as possible for this time trial while the GC riders will be more tired after the Pyrenees and that should show against the clock.

The Route
Starting out in Avranches the riders head south towards the first time check in Ducey after 9.5 km. It’s not really flat but it’s not very difficult either with many descents. This first part takes place with a strong tail wind and sets for a very fast start. After the checkpoint, the route turns west and this is where the road starts to kick up a little. Not much, but enough to require a change or rhythm.

Towards the second time check, we can expect a strong crosswind and without any kind of shelter from the wind, the pure climbers and other riders not strong against the clock, will be in big troubles.

The Finish
From the checkpoint in Courtils, there are 11 km to the finishing line. With 3 km to go the riders turn right - into the head wind - and continue straight out towards Mont-Saint-Michel. There is a 180° turn with about 500 meters to go before crossing the finishing line. The riders won’t enjoy this stage but for the TV-viewers if will be yet another spectacular day in the Tour.

The Favorites
Without Fabian Cancellara and Bradley Wiggins in the race, there is really only one rider fitting the “Favorite” category. Tony Martin had a horrible crash on the first stage of the Tour but it doesn’t seem to trouble him too much anymore. At least not his performances on the bike. He did great in the team time trial with big pulls in the end (and that was only 3 days after his crash) and he seems very confident heading into this time trial.

According to Tony Martin himself “anything but a stage win will be a huge disappointment”, so there you have it, Tony is the favorite.

Chris Froome will be interesting to follow as well. Before the Olympic Time Trial last year, he told me the flat route didn’t really suit him, but he still ended up taking the Bronze medal. Froome and Team Sky have had a couple of very tough stages in the Pyrenees and I doubt Froome will be able to challenge Tony Martin. That being said, I wouldn’t be surprised if Froome makes Top3 again.

The Jokers
My outsider for this stage is the oldest Tour de France debutant in recent history of the race. Svein Tuft is a real powerhouse and like Tony Martin, he was the reason why his team did so well on Stage 4. GreenEdge won with less than second and that’s most likely thanks to this strong Canadian. Tuft has been saving energy - as much as you can in your debut Tour hitting the Pyrenees - the last days and he’s now hoping for another big result. Svein Tuft started out the season in a fantastic way when he won the time trial in Tour San Luis. Before Tour de France started, Tuft won the opening prologue in Tour de Slovenia and after the team time trial success, I think Tuft will do great today.

Another great candidate for a good result is Sylvain Chavanel. The French Champion will be eager to show off his jersey in the time trial and this is a perfect distance for Chavanel. Teammate Michal Kwiatkowski could very well end up in the top end of the table and I wouldn’t be surprised if Omega Pharma Quickstep put at least three riders in Top10.

Click here for the starting order. First rider is Astana's Dmitriy Muravyev who starts at 10:28 CET. My joker Svein Tuft starts as number two at 10:30 and his time should be be a reference time for the rest of the riders. Tony Martin starts at 12:36 while Chris Froome is last rider on the ramp starting at 16:54.

Just like during the Giro d’Italia this year, I once again have the chance to bring you daily “Fly Through” previews from Global Cycling Network. Here is Stage 11: