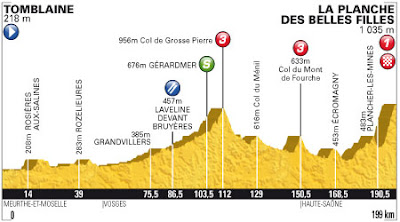 Finally. After a week of sprinting it's time to test the climbing legs. Despite it being the first mountain stage of the Tour it's only categorized as a "hilly" stage, but don't be fooled. It's true there is only one steep climb on the menu, but that is also a very nasty one!

The 5,9 km up to La Planche des Belles Filles have an average of 8,5% with ramps of 11%, 13% and over 20% on the last steep part towards the finishing line. It's a tiny road with the cold mountain wall on one side and trees on the other and without many turns the riders constantly will be able to see each other up the road. Just when you think you've reached the top of the climb and it's flat for about 100 meters you turn right up in the sky hitting the steepest part of the climb with percentages up to 22%. The last 50 meters or so are flat. Not that it will change anything though.

Favorites:
The way I see it there are two scenarios:
1) A break of 6-10 riders gets a good gap and they end up fighting for the stage win while the favorites only focus on each other minutes behind.

2) A break gets away but teams like FDJ (Pinot), Lampre (Scarponi) & Cofidis (Moncoutie/Taaramae) aren't represented up front and start to chase in order to have a crack at in the final. Also Rabobank (Gesink, Mollema & Kruijswijk) could easily take responsibility and chase the break. All ending up with the favorites fighting it out for the stage win and the yellow jersey. 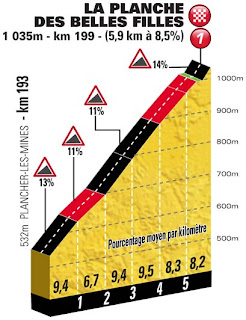 Personally I think the scenario #1 is most likely to happen. Everybody knows that the winner on La Planche des Belles Filles (almost certainly) will take the polka dot jersey (2x10 points) and because of that, we should see guys like Chris Anker Sørensen (+5 min), Johnny Hoogerland (+14 min), Daniel Martin (+19 min), Matt Lloyd (+20 min) & David Moncoutie (+20 min) try their luck. All 5 have said they are aiming for the polka dot jersey and this stage is definitely one they have red-circled from the beginning. Let's hope neither of them get too banged up on yesterday's carnage stage.

After Stage 5 Bjarne Riis said that the man for the weekend is Chris Anker Sørensen and knowing how much the Danish climber wants to show himself and get in the fight for jersey, I will be surprised not to see him up front if a good break gets away. Also David Moncoutie will be eager to get in the break. The final climb is quite similar to Mont Faron - one of Moncoutie's favorite climbs - and the steep parts really suit the French veteran. The weather forecast shows sunny conditions and that is very good news for David Moncoutie who likes it hot and dry.

I mentioned FDJ and Pinot before and that's for a reason. Thibaut Pinot lives nearby and know the way up to La Planche des Belles Filles very well. He has been training a lot on it this year already and said that it is his big dream to win on this climb.


Looking at the GC favorites this is truly a climb that favors the pure climbers. The ramps of 11%, 13% and 20% comes and go meaning that you constantly have to change the rhythm. Not exactly Bradley Wiggins' cup of tea. For Wiggins it's all about minimizing the gaps and make sure Team Sky set a pace so high no one is able to attack.


Before yesterday's stage I would picked Wout Poels and Pierre Rolland  as solid candidates for the win, but after Poels crashed and withdrew and Rolland crashed and hurt his shoulder and his back, I think I better drop those two again. Still if Rolland is ready, he could really take revenge on this steep climb!


For pictures of the final climb up to La Planche des Belles Filles click her!
Posted by Mikkel Condé at 8:39 PM