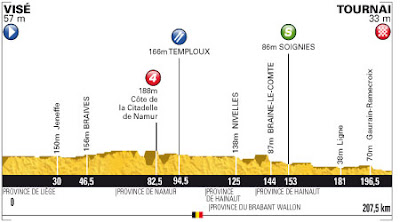 Despite two interesting stages with a lot of drama we haven’t really seen anything we didn’t expect. Fabian Cancellara won the prologue like he was supposed to and Peter Sagan did the same in his very first Tour de France - giving a special bike for Stage 2 with “Tourminator” written on the frame. I don’t think much will happen on this stage and anything but a bunch sprint will be a massive surprise, the way I see it.

Favorites:
The good thing is that for once we have a lot of fast guys who can actually win the stage. It’s not just Mark Cavendish anymore. Andre Greipel, Marcel Kittel and of course Sagan the Tourminator will all have a crack at it. In the past Cavendish’ team has been taking responsibility early on, starting to bring back the break away, but that won’t happen this year. It’s all for Bradley Wiggins now and therefore it’s up to the other teams to take control. One of those teams are Argos-Shimano, team of the German sprinter Marcel Kittel and despite this being their first Tour de France, Argos-Shimano are to take responsibility. “We know we have one of best sprinters in the race, so we owe to act accordingly”. An impressive statement from a Wild Card team!

The final kilometers towards the finish line are pretty straight forward but not without two roundabouts within the last 2000 meters. Right after the gate to the last kilometer the road bends slightly to the left before the last 600 meters straight out to the finish line. Both Lotto-Belisol and Argos-Shimano have a strong lead out train ready to roll and I think whoever of those two taking the lead will bring their sprinter first to the line. Mark Cavendish normally doesn’t do well in the first bunch sprint in the big stage races and with only two guys to help him I think it will be a real power sprinter like Greipel or Kittel who takes the win. 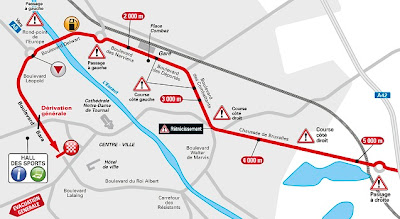