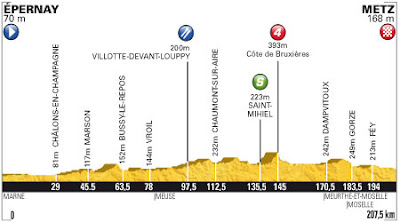 Another sprint stage and another win for Andre Greipel. Just like it was supposed to be. That’s 5 out of 6 correct winner picks. Let’s hope it can continue for a while. The question is now if Greipel can make a Tour de France hat-trick on Stage 6. Looking at the profile there is no doubts it will turn into another bunch sprint and once again the race organizers have put in a very tricky finish!

Favorites:
The last 950 meters are all flat out to the finish line so if Lotto-Belisol manage to time like they have done in the past three sprints it should be another for Andre Greipel. However I think Mark Cavendish will be extremely motivated to take revenge. On Stage 4 he got sidelined in the sprint by the crash and on Stage 5 he made a mistake of losing a few positions in the final and was unable to overcome Greipel on the uphill finish.

The Lotto-Belisol train has been perfect so far, but they need to be very alert in the final on Stage 6. Just before the 2K mark there’s a 180° corner in the big roundabout from Rue du 20. Corps American going to Rue de l’Argonne and after that yet another roundabout with 1500 meters to go. The most tricky part of the finish has still to come though. The “Last Kilometer Gate” is placed just before the viaduct under the railroad and right after that the road turns left in a 90° corner.  Luckily the weather forecast shows it should have stopped raining in Metz by then, but if not the riders have to be extremely careful coming through that viaduct and turning left.

Thinking about the last days it seems almost impossible we shouldn’t see any crashes in the finish and I wouldn’t be surprised if one or two riders go down in that last tricky corner.
Lotto-Belisol with Andre Greipel is of course the team and man to beat, but don’t forget that Mark Cavendish is always best when he has some rage inside of him. I think the World Champion will be those few extra percentages more eager to win and that could be very well be just enough.

With three sprint stages behind us already it’s not very difficult to say who’s going to be in the mix. Alessandro Petacchi took 2nd place on Stage 4 and if he manages to place himself near the front and doesn’t lose any positions in the last corner this finish could be very suitable for strong Italian to take another podium place.