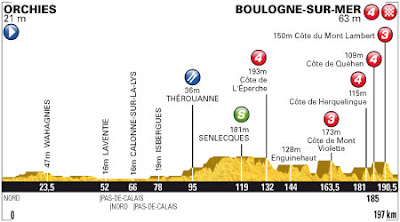 We are already at day four in the Tour de France and just like Stage 1 this one has Peter Sagan written all over it! The last 35 km shows no less than five categorized climbs. Short one between 1 and 1½ km but all around 6-9% average. It looks like a real Ardennes classic and with the last 700 meters kicking up with 7,4% it’s tailor made for the puncheurs!

Favorites:
Not only is the last 700 meters towards the finishing line favoring Peter Sagan because it’s uphill but also because the last 150 meters are very tricky! After 500-600 meters uphill the road turns left just to turn right the very next moment in a roundabout before crossing the line. Sagan has shown numerous times how exceptional his bike handling skills are and the finish could be a little bit like the one in Tour de Suisse where he managed to overcome Ben Swift on the final meters despite a tricky double corner section just before the line.

Last year people seemed sure that Philippe Gilbert would win on Mûr-de-Bretagne after his outstanding victory on the first stage, but Gilbert couldn’t repeat it. Some might think that it will be the same with Sagan, but that’s not the case. While Gilbert is a one-day-race specialist, Peter Sagan knows how to win day after day in a stage race. In Tour of California he won five stages out of eight and in Tour de Suisse he won four out of nine. Sagan has already pointed out Stage 3 as a good chance for him to take his second stage win in the Tour and if Liquigas can managed to keep it together he will be very difficult to beat. Very difficult!

Alejandro Valverde did an outstanding job on Stage 1 when he managed to get back to the peloton after nearly crashing just a few kilometers before the final climb. Needless to say he started the climb in the back of the pack, but he still managed to get near the front and if it hasn’t been for Gesink sprinting close to the barrier in the final, Valverde could very well have taking 4th place behind the leading trio. I doubt Alejandro Valverde will win Tuesday’s stage but I’m sure he will be in the mix - probably top3.


Fabian Cancellara said that he would try to attack again if he saw an opening, and I wouldn't be surprised if he went away just over the top of the last cat3 climb. The downhill section is very tricky and despite what the profile shows it's actually downhill almost all the way towards the final 700 meters.

If you are looking for a joker, look to Robert Kiserlovski. The Astana rider is always rock solid and good on these kind of hills. His main job is to make sure Janez Brajkovic stays near the front, but if he sees his chance he won’t hesitate to take it. Team mate Alexander Vinokourov is also a man for this type of finishes and he is ready again he could be a serious outsider in Boulogne-Sur-Mer.