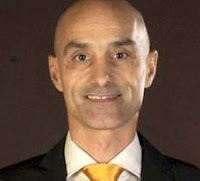 Team Geox finally showed their real potential on the stage to Angliru last Sunday, when Juanjo Cobo won the stage and ripped the red jersey off Bradley Wiggins. I guess I don’t have to point out it was a very happy team manager I talked with on Monday’s rest day.

Mauro, first of all, congratulation! This must be the best rest day for you in a long time?
Thank you. Yes, I am very happy. Since the beginning of the season we have known we had a good team with a good level, but for many reasons we have never been able to really show it. Now it finally happened.

At what point during the Vuelta did you start to think that Cobo could be a player for the overall win?
Well, from the beginning actually. We knew he could do a good GC, since he did top10 two years ago. Normally he would work for the captains, but he managed to stay up front all the time and only lose some time in the time trial. One week ago we told him that he should stay close to Menchov and follow him and only work hard if we really needed it.

Menchov showed on Angliru that he is back at his former great level, what happened to him in the first week?
We really didn’t have a good start. First we lost time in the team time trial when Blanco crashed and then Denis had a mechanical problem and lost time. So after just a few stages he was more than 2½ minutes behind and that made it difficult for him, also for his morale. Also he is not so good at placing himself in the sprints so he has also lost some time there, for example when Sagan took his second stage win [stage 12, Menchov lost 19 seconds, edt.]. But now he is back and that is very important in order to keep the jersey.

What about now. We still have one week to go, what is the plan?
Now we have to defend the jersey as long as possible. Peña Cabarga [on stage 17] is not an easy climb and the stages in Pais Vasco are definitely not easy either. It will be great to ride in the Cantabria region with the jersey. The team has base there and we have the region as sponsor on our jersey, moreover Cobo is also from that region. We really have to stay focused now and keep the concentration all the time.

What can we expect on Peña Cabarga? Will Cobo try to take more time?
It depends on how he feels. It has some very steep parts and is more a climb for Purito-Moreno and Nieve-Antón. But of course if he can, he will try to get some more time and maybe some bonus seconds. We must be smart. It’s now Froom and Wiggins who have to attack.

And who do you see as the strongest of the two?
I think they are on the same level. Froome is very, very strong right now. Also in the time trial. He is closer, but Wiggins has more experience. One week is still a long time and it’s important for them that they are two riders who can attack. We will see what happens.

Last, but not least, Mauro Gianetti also confirmed that the team has reached an agreement with Juanjo Cobo for two more seasons!
Posted by Mikkel Condé at 10:39 PM