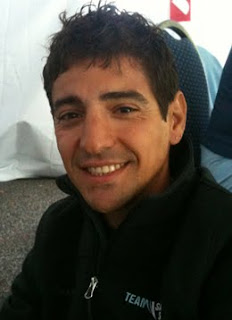 Sitting in the grass in one of the spectators’ tents, watching the Women’s Road Race, not an eye on him. Alberto Contador’s best friend, team mate and right hand in the mountains; Jesus Hernandez seems to be able to walk around completely unnoticed. Somehow I guess it would be very different had Contador been here too. With a flat course like the one in Copenhagen, naturally Jesus has not been picked for the Spanish team, which is why the reason for his presence has to be found in the Women’s Road Race, where his girlfriend Anna Sanchis is participating.

About the World Championships

Jesus, how do you see the course? Is it a good one for the Spanish team?
Yes, I think so. I have just talked with the Spanish coach and he told me that Freire is very, very motivated and really wants to win this.

Sounds good. Who is your favorite for tomorrow? A lot of good riders…
Yes, indeed. There are many riders to choose between and I don’t see one super favorite. The thing is that the course is not flat, but not very hard either. Freire could win it on a good day, but also Hushovd, Cavendish and of course Gilbert who is looking very strong. The question is; who is going to control the race? It’s going to be a very nervous race with so many riders in the peloton, especially in the corners and you have to be careful not to crash.

Yesterday [Friday] both of the road races ended in a bunch sprint. If we say that won’t happen tomorrow, who is your favorite then?
Well Gilbert, no doubt about that. He has had an incredible year so far and with an uphill finish like this, he is the best man in the world.

And what about Rojas?
Rojas could be a rider for the podium, but he has nothing on Gilbert. The only riders who can beat Gilbert areFreire, Hushovd and maybe Cavendish. It’s hard to say anything about Cavendish because he has never been in the final in the World Champions, but if he is there at the end, of course he is good bet. Still, I will say it’s a better course for riders like Hushovd and Gilbert.

Okay. Let’s talk about next year. What is going on right now. The whole situation with Alberto must be very frustrating?
Well, right now Alberto is still a rider with Team Saxo Bank for the next season. I think the first hearing is in November but right now, we just think about the Tour next year. We can’t really do anything else. What happens, happens. If it’s good, great. If not, then we take it from there. Right now we take it easy and only think about winning the Tour.

Winning the Tour. Something that many thought Alberto would do this year as well. Was the Giro-Tour double too much for him?
Well, it’s important to know that when we planned this season, we didn’t even think about going to the Tour and therefore we only focused on preparing for the Giro in the best way possible. The Tour was not on the menu since we didn’t know what would happen with Alberto in July. So, because of that we just did everything for the Giro and then in May we got the word that Alberto could do the Tour and then, well…we were a little bit too tired after such a hard Giro.

If you could pick, who would it be?
Puff… [laughing] I don’t know. They all seem to have contracts now. We just got Paulinho who is very good rider in all aspects; time trialing, on the flat, in the mountains and he moves around in the peloton very well. He is very clever and definitely a good rider for our team, especially since Richie Porte leaves us for Team Sky. We have good riders to work, but as I said, we really need a rider who can be with Alberto at the end.

Team Saxo Bank has always had a very strong team spirit, letting every rider has his chance to shine. Now, with Alberto in the team, it seems like the whole team is focused aroudn him. Like Mercatone Uno with Pantani.
Well yes, that’s true. Still, in the team we don’t have any other riders at Alberto's level. Nobody has that. So, I think it’s only normal. I mean look at how it was with Lance and Indurain, who had the whole team build up around them. Right now, the team supports Alberto and with all his wins I think it’s only to be expected. If he someday stops winning, well, then we will work for somebody else [laughing].

How about your own ambitions for the next year?
My primary goal is to arrive at the Tour with Alberto in the best shape possible. Then, in the Vuelta, if Alberto is ready, I will help him again. If he is not there, I will have the chance to fight for a stage win the mountains.

And you will ‘only’ be in races where Alberto participates?
Right now, I don’t know, but normally yes. For example in the Tour, it’s very important for us that we know each other very well. So, it will probably be like that all year. And hey, that suits me perfectly. To be riding with my best friend, well… great!

Last question. You have one more year left on your contract with Bjarne Riis and the team. What are your plans?


Well as you know, I’m staying with Alberto so if he goes so do I, but I can say that right now Alberto is very, very happy with Riis, and I’m happy with the team. If nothing happens we will stay here many, many years.
Posted by Mikkel Condé at 8:27 PM