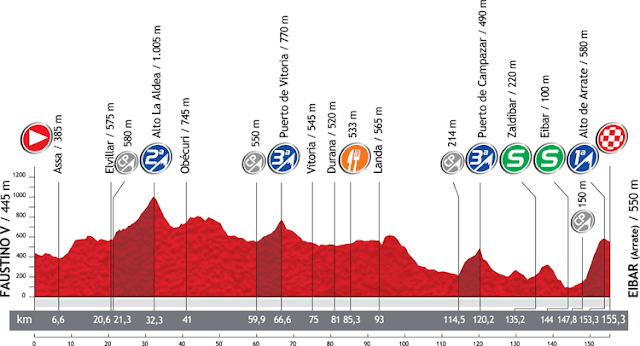 If you have been following the Vuelta a Pais Vasco the last years the finish on Alto de Arrate won’t be unknown to you. Samuel Sanchez has won here the last three times but also Purito has proven to be strong on this climb.

There are three categorized climbs on the menu before Alto de Arrate and with the stage only being 155,3 km long we are in for another hard day - especially in this extreme heat. Most likely a group of 4-5 riders will get away early and fight for the KOM points but I’m pretty sure it will all come back together on the final climb. An important factor in this Vuelta is the bonus seconds on the finishing line and with 12 seconds to the winner you can be sure that the overall favorite will do everything they can to take the stage win.

Alberto Contador already showed on stage 2 how important the bonus seconds are to him, when he took 2 seconds in front of his rivals and being only 14 seconds after the GC, it wouldn’t be a surprise if he takes over the Red jersey from Movistar’s Jonathan Castroviejo after the stage. Personally I think it will be a fight between Contador and Purito on Alto de Arrate and if they arrive together Purito will win the stage having the strongest sprint. As Samuel Sanchez has shown time after time it’s essential to be first in the last corner with 250 meters to go and Purito knows that as he took 2nd place after Sanchez earlier this year.

Alejandro Valverde is a bit of dark horse as this finish suits him very well, but wasn’t really set to do the Vuelta until the very last moment. If he’s ready this could be his day - as he would get the leader’s jersey too - but I have more faith in Purito to be honest.

As said I expect this to be a fight for the stage win between the overall favorites but if I should mention a joker it would be Javier Moreno from Movistar. Moreno finally got his chance with a ProTour team this year when he signed with Movistar and he showed right away how strong he is on the uphill sections when he - all alone - railed back all breakaway attempt on Willunga Hill so Valverde could sprint to victory.  Moreno has been great the entire season, latest in Vuelta a Burgos, and if he gets the green light I’m sure he will try an attack on Arrate.

Explanation: The French veteran is going for a fifth successive king of the mountains title but given the brutal parcours this year, Moncoutie will need to rack up the points as early as possible. It remainds to be seen how he’s riding following that nasty fall in the Tour, but Moncoutie may be tempted to puit down a marker today. Alejandro Valverde was a tempting choice for the win because he seems to be riding into some form – plus he would clearly like the idea of wearing red on his return to the Vuelta after a three-year absence. For my wildcard, how about Romain Sicard? The French rider from Bayonne is a tidy climber and this is the only stage that ventures into the Basque region so expect a sea of orange on the final Alto de Arrate. That said, Igor Anton and Amets Txurruka are probably more likely options... while Juan Manuel Garate might find some form in his old legs on the Arrate.