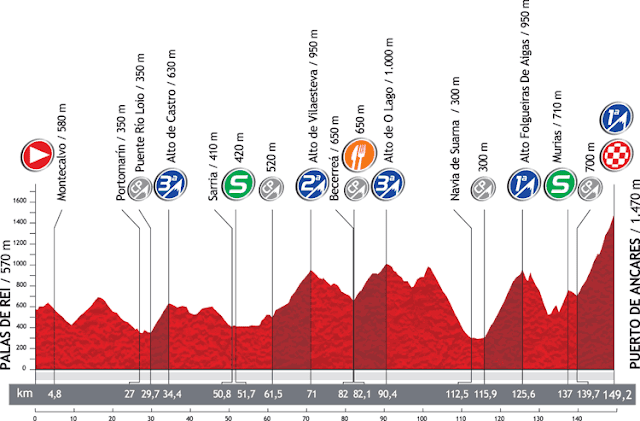 Welcome to the mountains. Forget about the "walls" we have seen so far, now it's time for some real climbing. With no less than five categorized climbs on the menu and only 149,2 km to cover it all this is surely one of the key stages in the Vuelta.

The final climb, Puerto de Ancares, had its Vuelta debut last year and that made for a brilliant show despite it being placed in the middle of the stage. The climb is 9,5 km long with an average gradient of 8,1% but with steep parts up to 12-15% within the last two kilometers. Some people calls it "the Spanish Mortirolo" and even though it's not as tough as Mortirolo you can understand the comparison. Before the riders get to Puerto de Ancares they need to tackle another category1 climb, Alto Folgueiras de Aigas. The average gradient is "only" set to 6,7% over 9,7 km but that's because of the last part where it evens out a bit a kilometer before the top. It's very steep in the beginning and then it stays 7+% all the way.

Looking at the profile I would say this is a great stage for Alberto Contador to drop guys like Chris Froome and Alejandro Valverde. The final climb is so hard that the selection will happen without many attacks and if Dani Navarro and Rafa Majka manage to stay with Contador again, I think the Saxo boys can make life very hard for the rivals. Alberto Contador knows he needs to drop Purito in order to win this Vuelta but he also knows it's only the classification in Madrid that counts. Contador won't panic if Purito stays in his wheel on the steep parts and I think the two of them will be able to profit a lot if they can work together again.

The bonus seconds seem to be very important again this year but on such a steep climb like Puerto de Ancares it's not only a matter of seconds but of minutes. Therefore I think a break will have a decent chance of making it again and if so I would like to point out Paolo Tiralongo. The Italian came here to go for the GC but crashed on the opening team time trial and hurt his hip. Day by day Tiralongo has been feeling better and on the stage to Barcelona he showed he is ready to attack again when he took 3rd place after Gilbert and Purito.

I think Paolo Tiralongo is back to his real level now and if he manages to get into the break he has very good chance of taking another Grand Tour stage this year. Tiralongo could also profit from the favorites looking too much at each other on the final climb and then attack without being a threat in the overall classification. In any case I see him as a very good joker for the stage win. It's also a very good stage for riders like David Moncoutie who aims at the KOM jersey. Also Nairo Quintana could do well on a steep climb like this one, but since I can only pick one, I'll go with Paolo Tiralongo.

Explanation: At last, we're in to the proper mountains. The Asturias beckons with a short and sharp stage 14 that gets harder and harder with each climb. While Joaquim Rodriguez has proved himself to be quite the canny tactician in red over his trademark ramps during the opening two weeks of racing, things will now take an entirely different complexion. I expect Alberto Contador to finally throw down the gauntlet and get that elusive win. With it, Bertie should take the red jersey as well. As for my joker, Euskaltel are due a win and Txurruka could be the man to deliver. Igor Anton is still too much of a threat on GC to be allowed to get into a break - but Txurruka should be given free reign to attack. I expect David Moncoutie to be in the break too - but I don't feel the French veteran will have the strength to prevail on the fierce Puerto de Ancares.

Right winner pick gives 3 points, if the joker wins it's 5 points while it's 1 points if the joker makes top3 on the stage.
Posted by Mikkel Condé at 8:18 PM