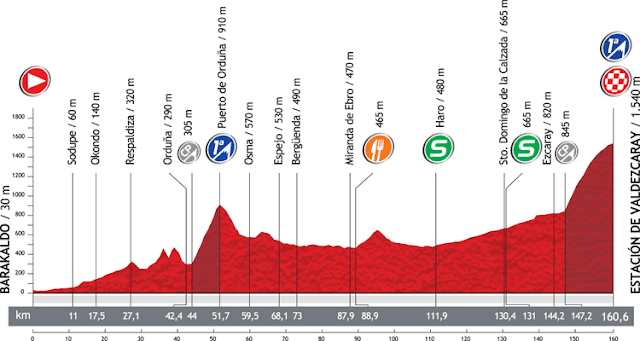 Close, but - despite the name - no cigar for Purito on stage 3 after he stopped pedaling the last 5 meters. Afterwards Purito said he was “pissed at himself for not winning a stage he practically had in his hands” and you can understand his frustration. Stage winner Alejandro Valverde lost Tour Down Under on bonus seconds earlier this year because he stopped pedaling just before the line, he learned his lesson and I’m sure Purito has done so too now.

Good thing for Purito is that he already has another change of success on stage 4. 160 km finishing at the Valdezcaray Ski Resort with a 13,4 km Category1 climb. The Rioja government recently spent 234.600 Euros on improving the Valdezcaray road (LR-416) so at least the riders can’t complain about the road conditions.

The climb itself isn’t very difficult and with an average gradient of 5,2% it’s definitely one of “lightest” mountains in this Vuelta. The steepest part is in the very beginning with 7,8 & 9% over the first four kilometers, but with the expected head wind it will be difficult to attack and stay alone in the front. Especially because the last 3,4 kilometers almost are flat (1-3%) compared to earlier.

Alberto Contador showed to be the strongest on Alto de Arrate on stage 3 attacking 6-7 times and I expect him to continue that on his way to Valdezcaray. Looking at the finish it should be another fight between Purito and Valverde though, but it’s an open climb with a lot of wind and if Purito isn’t 100% mentally ready again after his mistake on stage 3 he could be suffering a lot - as he has done in the past on these kind of “light”, long climbs. I still think Purito will stay up front with the best but I must say I think it will be another Katusha rider who’ll take the win.

Because this is such an “easy” second part of the climb it’s very likely that a big group with many of the favorites and some strong team mates swill be together in the end and if so I think Purito’s team mate Dani Moreno could be a good pick. Moreno just won Vuelta a Burgos overall two weeks ago after winning two stages with an uphill sprint finish and that could very well happen again in Valdezcaray.

Alberto Contador would be the natural winner pick here, but as I said, this “easy” finish suits Dani Moreno a lot better. We are still in Pais Vasco and that means that the Basque riders of course will try sneak away and snatch a stage win. It’s not a good climb for Igor Antón but instead his team mate Mikel Landa. It’s true that Landa almost lost two minutes on stage 3 but I still think he will be able to put in a strong attack. Plus the fact that he did lose time on Arrate means that the other favorites won’t go after him right away.

I think it will be a sprint in selected group of favorites but if not, Landa could be a good pick on home soil.

Explanation: Bert showed enough on the final climb of Arrate to show that he's in great form. On a longer, more arduous ascent we can expect him to take the win without too much ado. As for my joker, well, Euskaltel missed a trick on Monday and the only way to make up will be a win near the Basque region. Txurruka to get in the day's main break and hold on is my wildcard choice.
Overall score:
Felix 3 points
Mikkel 0 points

Right winner pick gives 3 points, if the joker wins it's 5 points while it's 1 points if the joker makes top3 on the stage.
Posted by Mikkel Condé at 10:07 PM