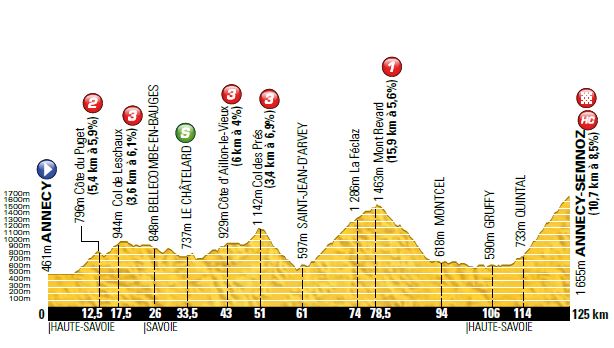 We didn’t see a real fight between the GC riders on stage 19 but it’s safe to say that will change now. With only 47 seconds between Contador (second) and Purito (fifth), we can expect quite a show on the final climb.

The Route
This is the shortest regular stage of this year’s Tour de France but with six categorized climbs on the menu, it will be anything but easy. The fight for podium will be furious and we will most likely see tactically attacks right from the beginning. Côte du Puget (5.4 km / avg. 5.9 %) and Col de Leschaux (3.6 km / avg. 6.1 %) are both located within the first 18 km of the stage and the heavy riders will have to dig very deep in order to finish this stage and see Paris tomorrow. The intermediate sprint is up after 33.5 km but it will be of little importance since Peter Sagan already seems sure to win the Green Jersey.

After two category 3 climbs the riders start on Mont Revard with 64 km to go. The 15.9 km towards the top of this category 1 climb have an average gradient of just 5.6 % but the climb is very steep in the beginning. There are still 46.5 km to go from the top of Mont Revard. The descent is not easy and the last climb of the day starts just 10 km after coming down from Mont Revard.

The Finish
The final climb up to Annecy-Semnoz is very steep and there is only one tiny part where you can catch your breath a little. The 10.7 km have an average gradient of 8.5 % and this is where the final podium will be settled. You can lose a lot of time if you have a bad day on this climb. There are not many steep hairpin corners but the gradients are steady of around 8 % and with parts of 10 % near the top. Remember, there are double up on the KOM points on the top of Annecy-Semnoz and that means 50 points to winner.

The Favorites
I think the GC riders will fight for the stage win today. Riders like Purito, Quintana, Valverde and Contador are yet to win a stage in this year’s Tour de France and even though the podium is more important, they don’t want to lose the chance by giving a break too much of gap early on. The final climb is very steep and that favors the tiny climbers like Purito and Quintana. Chris Froome will be happy just to keep his yellow jersey and I would be surprised to see him go for the stage win.

As it stands before the stage, Purito is one with most to win. He is fifth overall but only 47 seconds from Contador in second place. Purito has timed his condition perfectly and he knows the final climb well after training on it before the Tour. I think Purito and his teammate Dani Moreno will attack in the beginning of the last climb - on the steep parts - and try to make an early selection. Contador has not been great the last couple of days and if he’s not 100 %, it will show already.

Nairo Quintana has the White Jersey secured and he’s now gunning for second place overall and the KOM Jersey. If Quintana ends first or second on the stage, he seems sure to win the Polka Dot Jersey as well and honestly I would be very surprised should the Colombian  super climber not make top2 on this stage.

The way I see it, Purito and Quitana are the two favorites. I doubt Froome will go for the stage and I can’t see Contador beating Purito or Quintana as it is right now. Contador may be able to hold onto his podium place but it won’t be easy with the shape Purito is showing right now.

The Jokers
Since I find it highly unlikely that a breakaway makes it all the way for the third day in a row, I don’t really see any jokers for the stage win. This is between the big favorites and that’s the way it should be. However, should something happen and a break ends up getting too far away, look out for Wout Poels and Arnold Jeannesson. Both are out of the GC (29th and 30th overall) but they have been looking very good the last couple of days. At this point in the race, it’s all about who has something left in the legs. Jeannesson stayed with the favorites for quite a while on Friday’s stage but had to let go on the final kilometers of the last climb. Poels probably paid the price for his attack the other day and since none of them can go with favorites when they start to attack, I think both will try to hit the morning breakaway. It won’t be easy though. I think the Saxo-Tinkoff, Movistar and Katusha all will try something from the very beginning of the stage but should a break get away, I would be surprised not to see at least one my two jokers in it.

Just like during the Giro d’Italia this year, I once again have the chance to bring you daily “Fly Through” previews from Global Cycling Network. Here is Stage 20: