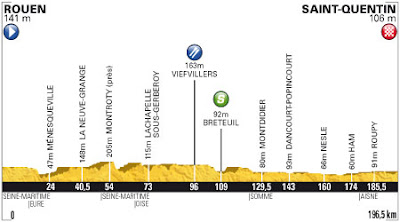 First of all. Crash or no crash it was a text book finish by Lotto-Belisol and Andre Greipel in Rouen (as predicted and expected). We won’t know how much of an impact the crash will have on the outcome of Stage 5, but what’s certain is that it will be another bunch sprint.

Favorites:
It would be easy just to copy/paste my prediction from yesterday, because I truly think Andre Greipel will take another stage win in Saint-Quentin. He has proven to be the fastest and if Lotto-Belisol manage to time it as well as they have done in the previous sprints, I can’t see who should overtake Greipel. Mark Cavendish maybe? But it all depends on how banged up the World Champion is from the crash. So instead of praising Greipel any further I rather take a look at the profile and the last kilometers of the stage.

Without a single KOM point up for grab a breakaway will be doomed and the riders know it. Don’t be surprised if it once again takes 30 km before the first rider tries to get away. A factor could be the cross wind we never saw on Stage 4 and if so we are in for another dramatic day.

The last kilometers are pretty straight forward. Heading towards the center of Saint-Quentin the peloton rides on a two lane road and they won’t be presented with any real danger before the last two kilometers. Shortly after passing the 2K mark the road turns left with a 90* corner alongside the Saint-Quentin canal and after 500 meters on the waterfront it’s time to turn left again in another 90*corner before going slightly to the right in the roundabout on Place du 8 October.  On the profile it shows that the last kilometer kicks uphill with 2,8% average but actually it’s not before 700 meters to go it’s start going uphill. Around 3-4% I would say and then it’s flat out the last 150 meters while slightly turning left towards the finish line on Boulevard Gambetta.

As of tonight (4th of July) the weather forecast shows that it most likely will be raining all day long. The riders will be able to take advantage of the tail wind on the last kilometers of the stage and that should give us another fast finish. Let’s just hope that the two tricky 90* corner within the  last two kilometers won’t cause any crashes on the wet roads.

If you are looking for a joker go for Tom Veelers. After Marcel Kittel got sick Tom Veelers has taking over as the designated sprinter  for Argos-Shimano and so far he’s giving them a 4th and 3rd place. I doubt Veelers has the speed to beat Greipel, but the uphill finish could suit him very well.