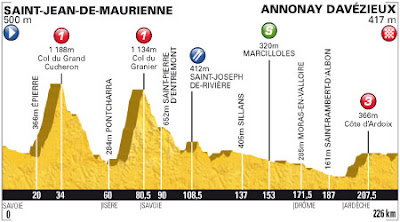 It’s going to be hard to follow up on the last days predictions, but I’ll give a try. The way I see it this is a typical breakaway stage. The two category 1 climbs in the beginning of the stage Col du Grand Cucheron and Col du Granier are both very steep (especially Granier) and that should give us a strong breakaway group to fight it out for win in Annonay Davézieux. From the top op Col du Granier there are 120 km to go so possibility of it all coming back together for a sprint in a selective group is also there - no doubts about that.

Favorites:
There is one guy you just can’t rule out in this Tour de France: Peter Sagan! Sagan has already won three stages in his Tour-debut and he has shown that he can stay with Nibali on climbs as well. On Stage 11 he was next to Nibali all the way up over Col de Madeleine and he even had enough energy to attack on the descent. If Peter Sagan manages to get into the break tomorrow he will be nearly impossible to beat. Also if Sagan is in the peloton group and the break hasn’t already got a solid lead, it’s not unlikely that Liquigas and other teams will try to bring it back together. The last kilometers are uphill with about 4% and if you can point at better rider right now for that kind of finish I’ll be impressed!

Riders like Sandy Casar, Sylvain Chavanel and Simon Gerrans are also excellent picks for Stage 12 as well. Casar tried his luck the other day but couldn’t keep up with Voeckler on the climbs. This time the climbs are early on the stage which means that Sandy Casar should be able to get back in the front if he loses a little ground again. Sylvain Chavanel has been trying like a maniac to get in the early breaks the last couple of days but so far without any success in the end. Chavanel wants a stage win very badly and I think this might be his best chance in the Tour to get it.

The same goes for Simon Gerrans. The Australian Champion was with Casar and Voeckler the other day but didn’t have the legs to finish it. On Stage 11 he took it easy and “cruised” through the day in order to be ready for this stage. The uphill finish suits Simon Gerrans perfectly and if I should point on any of these three guys I think it would be him. Then again, all three riders could do it. If you are looking for a super joker, look to Vacansoleil-DCM's Marco Marcato.