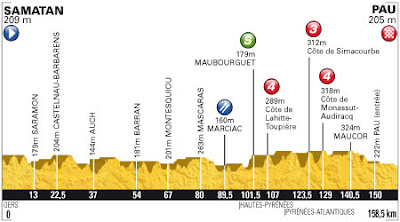 This looks like a stage for the sprinters, but could also very easy end up with yet another breakaway staying clear of the bunch.It’s an undulating route going up and down all day long with no time to recover and being only 158,5 km I think the break will have a good chance.

Especially because GreenEdge now won’t be pulling like maniacs again since Peter Sagan now seems sure to win the green jersey. Team Sky won’t waste any energy on bringing it back together and that leaves us with Lotto-Belisol. If the break is to be caught it will be Lotto-Belisol - and them only - trying to bring back together. It would be much easier just to put a guy like Lars Bak in the break from the beginning...

Favorites:
Let’s say a break will make it (I think the chance 50/50 with a little advantage to the break) who will be in it? Almost every single team wants to put a rider up the road but of course some are better than others. One of my personal favorites to get in the break is Argos-Shimano’s Koen de Kort. Without Marcel Kittel and Tom Veelers the team doesn’t have any super fast riders for the sprints so their only chance of getting a stage win is from a breakaway. Koen de Kort has been trying many times the last couple of days and Stage 15 is actually the stage suiting him the best. If he manage to put himself in the final break Koen de Kort will also be able to take advantage of his fast finish and that gives him a pretty solid chance of winning in Pau if he arrives in the front group.

Another rider knowing how to hit the right breakaways is Luis Angel Maté. Normally Maté would have been in four or five breaks already but this is his first Tour de France and I could imagine he needed a little time to get used to it. In the beginning he also had Rein Taaramae to look after but with Taaramae out of the GC and David Moncoutié out of the race, Luis Angel Maté now has a chance to show himself off on the big scene. Look out for “El Lince Andaluz”!

If Lotto-Belisol manage to make this stage end in a mass sprint after all the natural pick would be Andre Greipel. He has already won three stages in this Tour and with Peter Sagan (probably?) being a little tired after Stage 14 and Mark Cavendish working in front of the peloton, I can’t really see who should beat him.