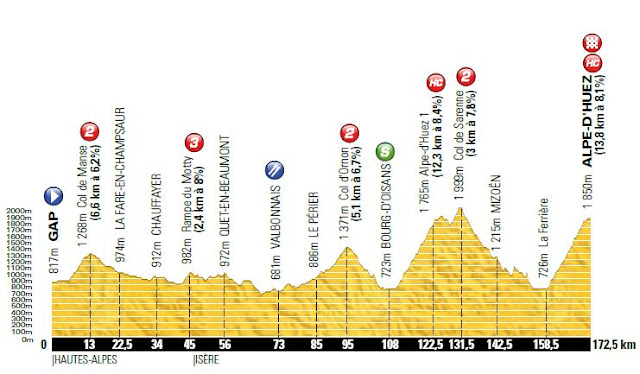 Chris Froome managed to win the time trial on day where he only focused on not taking too big risks. Impressived. Alberto Contador went All-In and finished second and I think Saxo-Tinkoff have something big planned for this stage.

The Route
This is the Queen Stage of this year’s Tour de France. Finishing on Alpe d’Huez this late in the Tour is already a tall order for many riders - climbing it twice within 60 km, that’s just brutal. The day starts where stage 16 ended, in Gap, climbing Col de Manse (6.6 km / avg. 6.2 %). 30 km later, it’s time for Rampe du Motty. This category 3 climb is only 2.4 km long but as the name suggests, it’s very steep with an average of 8 %. The stage is only 172.5 km long and these two climbs in the beginning will already tire out many riders before the main course gets served.

With about 90 km to go the riders start the ascent of Col d’Ornon. The 5.1 km towards the top have an average gradient of 6.7 % and it will be important for the GC riders to stay in front over the top. Alpe d’Huez starts quickly after the descent from Col d’Ornon and it’s vital to start the climb in a good position.

The Finish
The first ascent of Alpe d’Huez starts with 61 km to go. When reaching the top, the riders stay on a plateau for about 5 km before starting on Col de Sarenne. The descent from here is very difficult and if the weather forecast stands, and it’s raining, this could end up in a real bloodbath. There are rumors circling that the stage will be shortened but as of Wednesday evening, there are no official statement.

From the top of Col de Sarenne, there are 27 km to the beginning of the final ascent of Alpe d’Huez. The 13.8 km up through the hairpins have a frightening average gradient of 8.1 % and it starts out very steep. The first two kilometers have an average of over 10 % and it doesn’t really get easier before the final couple of kilometers (5 %).

Favorites - Jokers - Scenarios
Any climber with respect for himself wants to win on Alpe d’Huez. Ask anyone who’s not regularly following Tour de France to name a random climb in the race and he or she will most likely be able to mention this one.

Personally, I doubt a morning breakaway will make it all the way this time but do I think the composition of the breakaway will be vital. If I were Bjarne Riis, I would try to put a couple of strong riders in the break. Riders like Nicolas Roche, Jesus Hernandez and Daniele Bennati. Then I would tell Saxo-Tinkoff to go hard in the beginning of Alpe d’Huez and attack with Alberto Contador and Roman Kreuziger. Richie Porte won’t be able to close all the gaps and if they can isolate Froome before the top of Col de Sarenne, they can put him under pressure on the difficult descent. If riders like Nicolas Roche and Daniele Bennati are in the break, they can now wait for Contador and set a high pace on the descent towards the final climb. This won’t be an easy tactic to pull off but we know that Alberto Contador never rides for second place. This will also favor Movistar. In Nairo Quintana and Alejandro Valverde they have two strong riders both uphill and downhill and they should be able to work together with Saxo-Tinkoff despite what happened the other day.

When the Tour de France finished on Alpe d’Huez in 2011, Alberto Contador attacked right from the beginning of the stage. He was out of the GC and wanted something to bring home. For a long time it seemed like he would win the stage but on the last kilometer, Pierre Rolland bridged the gap and won the stage. It’s safe to say Contador has some unfinished business with this climb. He did however win on Alpe d’Huez in Dauphiné but everybody who remembers that stage, also knows Janez Brajkovic almost gave him that one. Contador is a winner and he wants to win on Alpe d’Huez in the Tour de France where all the big champions have won in the past. It won’t be easy against Chris Froome but if they can isolate him early, Contador may have a chance.

Should Saxo-Tinkoff and Movistar not succeed in isolating Froome before the final climb, I think Nairo Quintana will have a good chance of winning. He’s been the best climber - after Froome - in the race so far and if he can keep up this time, Froome will probably let him take the win as he intended the other day. On Mont Ventoux, Froome said the stage win would have been Quintana’s if he had kept the pace and knowing that, Quintana may find the strength to go extra deep on Alpe d’Huez. After Wednesday’s time trial Froome stated that he no longer aims at stage wins but only to keep the yellow jersey.

Another rider who will be extra motivated today is Mikel Nieve. The Basque climber not only has a beautiful first name, he has also turned out to be one of the strongest riders uphill. Futhermroe, he’s now targeting the KOM Jersey. Froome leads that competition in front of Quintana but since they both have other jerseys to wear (yellow and white), Nieve is now in Polke Dots. In 2003, Iban Mayo won on Alpe d’Huez and it would mean the world to Euskaltel could Mikel Nieve repeat that performance here 10 years later. Nieve has already won big mountain stages in Vuelta España and Giro d’Italia and he’s eager to join the club of stage winners in all three Grand Tours. In 2001 Roberto Laiseka won on Luz Ardiden and 10 years later Samuel Sanchez did the same thing. Sanchez won the Polka Dot Jersey that day and what a story if would be if Mikel Nieve could do it too - 10 years after Iban Mayo’s win on Alpe d’Huez.

Last but not least, look out for Daniel Martin. The Irishman had a bad day on Mont Ventoux but he’s been having his eyes on this stage for quite a while. Martin is fond of cycling history and he knows what it means to win on Alpe d’Huez. This year, we will see an Irish corner towards the top and I’m convinced Daniel Martin is very focused on giving his countrymen something to cheer for.

It’s hard to pick one favorite in this bunch. I hope Saxo-Tinkoff and Alberto Contador will put on a show but it won’t be easy. The best winner pick is therefore probably Nairo Quintana since Froome is no longer interested in the stage wins.

Just like during the Giro d’Italia this year, I once again have the chance to bring you daily “Fly Through” previews from Global Cycling Network. Here is Stage 18: