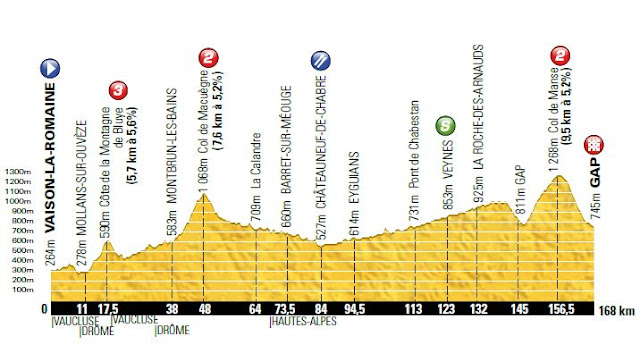 After the second and last rest day of this year’s Tour de France, the race continues with tricky stage leading the peloton towards the Alps. It’s not often we have a climb famous for its descent and not its ascent but that is the case this Tuesday.

The Route
On paper, the 168 km from Vaison-la-Romaine to Gap look perfect for a breakaway. The category 3 climb, Côte de la Montagne, starts after just 12 km and serves as a perfect place for a breakaway to be established. The last week of this Tour de France is extremely hard and the GC riders will be happy to have a quiet day in the peloton before the next four tough stages.

This is a short stage and that means the pace will high right from the beginning. For many riders, this is the last chance to win a stage in the Tour de France 2013 and it will be a furious fight to get into the morning breakaway. In case we don’t already have a break after Côte de la Montagne, I think it will happen on Col de Macuègne. This category 2 climb starts after 40 km and the 7.6 km towards the top have an average gradient of 5.2 %.

The riders will be enjoying a light tailwind for most of the day and from the top of Col de Macuègne a breakaway should be able to get a big gap. The following 100 km are more or less flat and unless Cannondale and Argos-Shimano miss the break, I doubt the peloton will be eager to catch them.

The Finish
With 21 km to go, the riders face the last climb of the day; Col de Manse. This category 2 climb is 9.5 km long and has an average gradient of 5.2 %. The ascent is not steep very steep but the descent is very difficult. In 2003, Joseba Beloki crashed hard in a corner and his career basically ended just 4 km from the finishing line in Gap. Lance Armstrong continued straight out, over the field, to join the group in the next corner. You all know the story.

The last time the Tour de France used this descent was in 2011. Alberto Contador hasn’t shown much of himself so far in the race but he came to life on Col de Manse with a series of strong attacks towards the top. In the end, he managed to drop Andy Schleck and on the wet descent Contador, Evans and Sanchez opened up a gap of more than one minute to Schleck who clearly didn’t feel safe on the bike.

The last 2.5 km are flat and straight out towards the line. Still, there are two or three roundabouts to overcome before crossing the finishing line. ASO have even put the 1-km-to-go-port in one of the roundabouts. As of Monday afternoon, the weather forecast shows rain in Gap at the time the riders are expected to finish and that means will get another dangerous finish to watch this year. Let's hope all riders stay upright.

The Favorites
I think a breakaway will make it but it all depends on Cannondale. They decided not to chase the other day when Matteo Trentin won the stage. The many climbs made it difficult for Cannondale to control the race but if they don’t have a rider in the break this time, I think they will try to bring it back for Peter Sagan. The final climb is not hard enough to drop Peter Sagan and the wet the descent won’t be a problem either. Nobody handle their bike like Peter Sagan and he can - by himself -  close a gap of 20-30 seconds on that final descent should it come to that.

Argos-Shimano is another interesting team for this stage. The climbs should not be too tough for John Degenkolb and if they don’t manage to put a rider in the break, I think they will set up a chase with Cannondale on the long flat part.

Should a breakaway make it all the way, Philippe Gilbert is my pick. So far BMC have been focused on Cadel Evans in the GC but after Sunday’s stage to Mont Ventoux, that race is now over. Gilbert has been complaining about not getting an opportunity to attack but now he has the chance. Gilbert is yet to win wearing the World Champion Jersey but he’s been very active the last couple of days. On Mont Ventoux he showed great climbing legs when he finished 29th together with Cadel Evans and if Gilbert was to win a stage in this year’s Tour de France, this is the one. Philippe Gilbert also has a chance should a breakaway get caught. He won similar stage in last year’s Vuelta España when he attacked on Montjuic with Purito.

Wednesday’s uphill time trial is very - very - hard and I think the GC riders will save as much energy as possible. That being said, should Chris Froome show any weakness on the wet descent, naturally Alberto Contador and the Belkin boys have to take advantage. Remember, Froome lost Tirreno-Adriatico overall this year on a rainy up-and-down stage (won by Peter Sagan).

The Jokers
Like the other day, there are tons of good breakaway candidates. Riders like Alessandro De Marchi, Romain Bardet, Sylvain Chavanel, Thomas Voeckler, Juan-Antonio Flecha and Damiano Cunego all lookspromising. I had Jan Bakelants down as my favorite for Stage 14 and he almost pulled it off. He’s been in great shape lately, I won’t be surprised to see him in front again on this stage. The same goes for Michael Albasini. He was the strongest rider the other day but burned up too much energy in the final. I’m sure he’s eager to take revenge and if he hit the right breakaway again, he will be difficult to beat. Adam Hansen is another interesting rider for this stage. He won a similar stage in the Giro d’Italia earlier this year - in the rain - and if he has the same strong legs this Tuesday, he could be a good pick for the stage win.

The wild card team, Sojasun, almost pulled off an amazing stage win with Julien Simon. The French puncheur was caught on the last kilometer and this stage is probably their last chance to make up for that. Julien Simon is ready to give it another go and so is Alexis Vuillermoz who’s knows these climbs very well. Should this stage end with a sprint in a reduced peloton, look out for riders like Michal Kwiatkowski, Tony Gallopin and Ramunas Navardauskas.

Just like during the Giro d’Italia this year, I once again have the chance to bring you daily “Fly Through” previews from Global Cycling Network. Here is Stage 16: