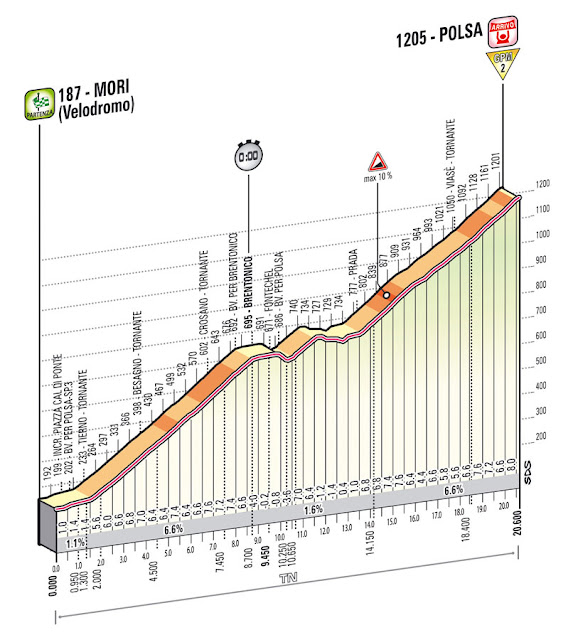 It’s uncertain what the following two big mountain stages will look like so the GC riders need to take as much time as possible in this uphill time trial.

Many talk about this stage as a ‘mountain time trial’ but that isn’t really accurate. It’s uphill yes, but it’s nothing like the mountains time trials we have seen in the past on Plan de Corones or Alpe d’Huez. The first 1.5 km are flat and then the climb starts with 6.6% average for the following 7.5 km. From here on it’s almost flat for 5 km with a little descent and a short ascent and this is where time trial specialists will be able to gain a lot of time on the tiny climbers.

The final 6.4 km are uphill with an average gradient of about 7% and parts of 10% with 5 km to go. It’s important to have something left in the tank for this final part of the stage and this late in the race, I’m sure we will see some surprising results.

The big favorite for the stage win is Vincenzo Nibali. He has been the best rider in the mountains so far and generally the strongest rider in the race. He did great in the first long time trial when he took 4th place and without Wiggins, Nibali is the man to beat. Cadel Evans is another one of the contenders for the stage win but he if he couldn’t beat Nibali in a long ‘flat’ time trial, I don’t see him beating Nibali uphill either. Both Evans and Nibali have been out training on the course earlier this year and both agree that it’s going to be a high pace start of the climb. The riders with big engines who are good on the uphill parts will be able to do great in this time trial and I think Team Blanco will do well.

The Dutch team have been attacking non-stop the last couple of days and they really want that stage win that will save their Giro d’Italia. Robert Gesink was close the other day and so was Wilco Kelderman the day before that. Both Gesink and Kelderman are strong against the clock - especially with so many uphill kilometers - and together with Stef Clement, who took 5th place in the first time trial, they have three very strong contenders for the stage win.

My personal outsider for the win is Dario Cataldo. He started out great with the win in the team time trial but then he got sick. It took many days for Cataldo to get better but now he finally seems to be back at this best. He’s been good in the mountains the last couple of days helping out Uran and Henao but he’s also been able to save himself for this stage. Cataldo is the Italian Time Trial Champion and he will be eager to show off that jersey in the Giro. Winning may be too much to ask of Cataldo after his sickness but I wouldn’t be surprised if he did a great stage and made Top3. The favorites have been testing each other the last couple of days in horrible weather conditions and anyone who has been able to save some energy will have an advantage on this stage.

For other outsiders look to Ramunas Navardauskas and Tanel Kangert. Both are in the shape of their life and good against the clock. The same goes for Giovanni Visconti. He has already won two stage in this Giro d’Italia but that doesn’t mean he’s done winning. Visconti has never been better than right now and with his newfound strong mentality, he should have what it takes to win time trial soon. The last days’ impressive efforts will not favor him but he should be in for another good performance.

I promised you something extra for the Giro previews this year and here it is. In collaboration with GCN, you’ll find a short video preview of each stage of the race. Here is Stage 18:

For live coverage of the stage check out steephill.tv
Posted by Mikkel Condé at 10:36 PM