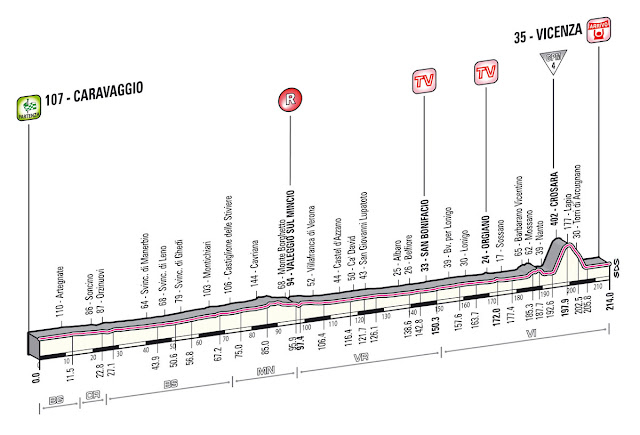 First of all, congratulation to Beñat Intxausti on an amazing stage win. It looked good for our picks with Rodriguez, Herrada & Capecchi in the break but Katusha and Radioshack started to get protect their GC riders. Anyway, let’s move on to the stage in hand.

The final of Stage 17 is very similar to the one on Stage 16 but this time the first 192 km are pancake flat. With 21.4 km to go the day’s only climb, Crosara starts. It’s only a category 4 climb but like with Andrate (cat3) on Stage 16, the category means nothing. Crosara is 5,3 km long and the first 4 km have an average gradient of 8,1% with parts of 12%. On paper, this may look like a stage for Mark Cavendish but there are only 16 km to go from the top of Crosara and if the GC riders decide to test each other again, the sprinters can kiss this stage goodbye.

I wouldn’t be surprised if a morning break makes it all the way and that means we have to look to opportunistic riders once again. Vacansoleil-DCM don’t have a sponsor for the next season after both Vacansoleil & DCM recently decided not to renew their contracts. The Dutch team are good at hitting the right breaks and especially Marco Marcato will be motivated to do well on this stage. This is Marcato’s first Giro d’Italia and with the stage finish near his hometown, he will do everything he can in order to give his fans something to cheer for. Marco Marcato knows the Crosara climb better than most of the riders in the race and I’m sure he will show himself in the final.

Another rider who will eager to show himself is Marco Canola. You might remember Canola from Stage 5, when he ended up alone in front on the last kilometer after the big crash. Canola didn’t have the strength to keep John Degenkolb behind him but he showed on Stage 13 that he copes well with the final climbs and with his fast finish, he could be a good outsider for the stage win.

Vini Fantini seemed to be in a perfect position on Stage 16 but despite having Di Luca and Rabottini in front, they ended up as the big losers after Santambrogio had an off day. Santambrogio lost 2:24 min and without teammate Oscar Gatto it would have been a lot more. Gatto chased like a possessed and if he has the same kind of legs on this stage, he will be very difficult to beat.

Once again, you can’t really talk about favorites so I’ll do like yesterday and leave you with the following riders as my picks:

I promised you something extra for the Giro previews this year and here it is. In collaboration with GCN, you’ll find a short video preview of each stage of the race. Here is Stage 17:

For live coverage of the stage check out steephill.tv
Posted by Mikkel Condé at 10:14 PM