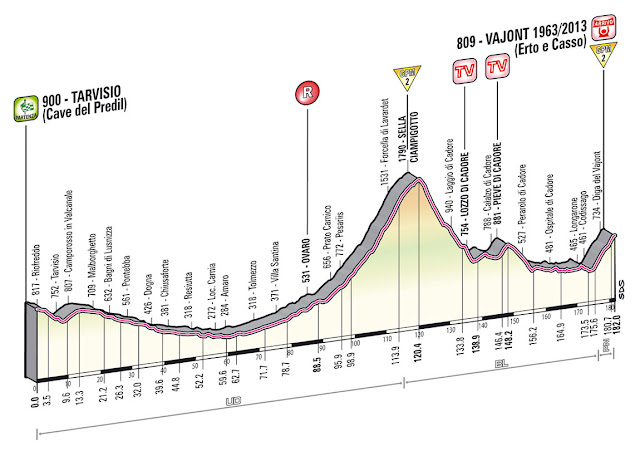 Last year’s winner, Ryder Hesjedal, didn’t live up the promising riding we saw in the first week and he’s now out of the GC, losing more than 20 minutes on Stage 10. Bradley Wiggins is still in the mix but yet again, the Tour de France winner couldn’t follow the best uphill. Gesink lost about a minute, which was expected but so did Scarponi and that was a little surprise.

Before the Giro started, Cadel Evans said that he still aims at winning the Tour de France this year, and therefore I didn’t count him in as a serious contender for the GC. I still doubt that any rider can dig deep in the last week of this race and still have a chance of winning the Tour a few months later, and if Cadel stays up front the rest of the race, I’m sure he will end up assisting TJ again in the Tour.

Anyway, let’s take a look at Stage 11. It’s another day in the mountains, but the climbs aren’t nearly as steep as on Stage 10. Despite a short uphill section in the beginning, the first 70 km are downhill. From here on the riders slowly start on the category 2 climb, Sella Ciampigotto. With an average gradient of just 4.4%, this climb may not sound difficult but it does take the riders up in 1700 meters above level and the ascent is almost 30 km. Astana will most likely set a comfortable pace in the peloton but if a team like Vini-Fantini manage to miss the big break again, they might go to the front and crank up the speed in order to minimize the gap.

There are still 55 km to the beginning of the final climb from the top of Sella Ciampigotto and luckily, the weather forecast shows dry roads on the 20 km descent. The stage ends in Vajont and the final 7 km are uphill. It’s another category 2 climb and the average gradient is just 5.2%. Still the climb does kick up with 7% the last 1.5 km before the final 400 meters are downhill toward the line.

The big break wasn’t strong enough to make in on Stage 10 but since the climbs aren’t as steep this time, I suspect a break will make it. Again, Astana will be happy to let the 20 bonus seconds go to a rider down the GC and I doubt BMC have the team to chase back a break in order for Evans to win the stage. That being said, if it does come down to the favorites, Evans seems to be the best pick right now. Either him or Carlos Betancur. The strong Colombian has taken 2nd place two days in row now and he definitely has the kick to drop the rest on the steeper part towards the top of the final climb.

Team Colombia missed the break on Stage 10 and I think they will be eager to take revenge on Stage 11. Chalapud and Pantano had a quiet day in the peloton and both should be ready to attack from a far again. Chalapud is chasing the KOM jersey and I expect both him and Pirazzi to make the morning break and take points on Sella Ciampigotto. Vini Fantini have lost a couple of stages in this race already and I think they will do whatever they can do get into the morning break. Di Luca, Rabottini & Garzelli are all out of the GC and especially Garzelli seems to be getting into shape now. He tried to get into the morning break the other day and even though he hasn’t showed much yet, I’m sure we will see him in the second part of the race.

Another good breakaway contender for this stage is Pieter Weening. He is the now out of the GC and favorites can let him get away without worrying. Weening is solid on the climbs, he even turned out to be among the best in Pais Vasco, and he’s strong on the descents as well. These kind of gradients are good for Weening and with the last 400 meters slightly downhill, he seems to be a good joker for this stage. The same goes for his teammate Christian Meier.

I promised you something extra for the Giro previews this year and here it is. In collaboration with GNC, you’ll find a short video preview of each stage of the race. Here is Stage 11:


For live coverage of the stage check out steephill.tv
Posted by Mikkel Condé at 10:09 PM