The stage has been cancelled! 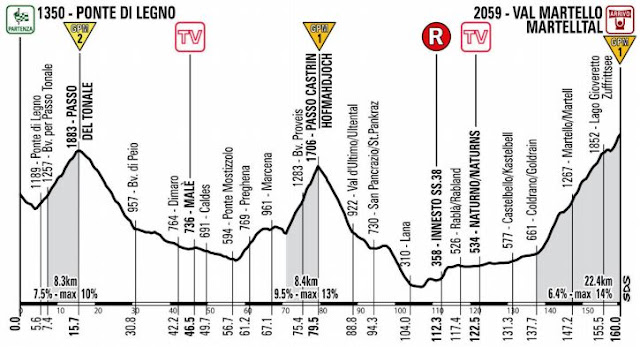 Due to bad weather, yet another mountain stage has been modified. The Giro organizers had to cancel both Gavia and Stelvio and replace them with Passo del Tonale and Passo Castrin Hofmahdjoch.  These are not nearly as tough as Gavia and Stelvio but they will provide an early selection.

The stage starts with a short descent and then it’s time for Passo del Tonale. It’s only a category 2 climb but its 8.3 km have an average gradient of 7.5% and the riders chasing the KOM jersey will have to attack early. Stefano Pirazzi seems to have the competition under control but he can’t afford to miss the morning break and I expect him and Jackson Rodriguez, Robinson Chalapud and Giovanni Visconti to get away on Passo del Tonale.

Vincenzo Nibali destroyed the rest of the peloton on the uphill time trial and he now has his stage win in the bag. Of course he would like to take another one but I doubt he will use up his team just to chase down a morning breakaway. At this point in the Grand Tours, the riders just around Top10 normally try to attack from a far in order to move up a few spots. Thomas De Gendt did it last year and that almost gave him the overall win. I don’t think anybody can threaten Nibali in this race but the last two podium spots are definitely up for grab. Rigoberto Uran, Cadel Evans and Michele Scarponi will most likely wait to the final climb but it would be interesting to see Lampre send Przemyslaw Niemiec up the road early.

Niemiec asked Scarponi earlier this week what he would have to do in order to take the Pink Jersey and Scarponi told him that he should attack from a far and not just wait until the final kilometer. A Top5 place overall will be a big result for Niemiec but since Lampre have both Niemiec and Scarponi in Top5 right now, they should try something spectacular and at least get one rider on the podium.

Another strong Pole with his eyes on a stage win is Rafal Majka. Bjarne Riis had big plans for Majka for last year’s Giro d’Italia but due to a knee injury, Majka never got to start the race. This year, Majka is eager to show himself and after the best time trial of his career he is not 6th overall. Majka also took back the White Jersey from Carlos Betancur and even though he says it’s not a priority, I’m sure he will do everything in order to keep it. The big goal for Saxo-Tinkoff is still a stage win and I think Majka will give them one in these final two mountain stages. Rafal Majka is 6:45 min after Vincenzo Nibali so he won’t be the first rider Nibali starts chasing down. He will however be the first rider Carlos Betancur will counter. The White Jersey is Betancur’s biggest target this season and he is just two seconds after Majka before the stage. I expect a great dual between the two climbers on the final climb. A dual that very well could turn out to be a dual for the stage win as well.

The final climb is 22.4 km long and it has an average of 6.4%. The first 6.5 km are steep with 8%. Then there is a short descent followed by 8 km uphill with 7% average. With 6 km to go the climb kicks up with 14% and this will be a good place to test the competition. Hereafter it’s ‘flat’ for about 5 km before the final 1.5 km kicks up with 14% towards the line. The steep hairpin turns will be great for an explosive rider like Betancur, so expect him to put a couple of strong attacks towards the line.

Movistar are having a great Giro d’Italia with four stage wins and the Pink Jersey and I wouldn’t be surprised if they took another one here. Eros Capecchi and José Herrada are great riders for an early breakaway, Capecchi earlier pointed to this stage as his favorite, and Juan José Cobo is also a good pick. Of course they will need some to protect Beñat Intxausti but a morning break without any of the three mentioned will surprise me.

It’s difficult to pick 1 favorite with so many strong riders so instead I’ll make two groups.

I promised you something extra for the Giro previews this year and here it is. In collaboration with GCN, you’ll find a short video preview of each stage of the race. Here is Stage 19:

For live coverage of the stage check out steephill.tv
Posted by Mikkel Condé at 9:32 PM