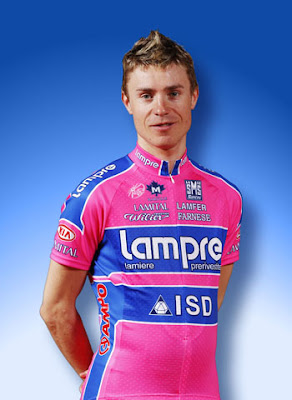 Damiano Cunego showed in Tour de Suisse that he can stay with - and beat - the best riders in the moutains. Now it's time to show that in the Tour, and with the interesting finish on Mur de Bretagne on stage4, don't be surprised if you see Il Piccolo Principe right up there fighting for the stage win!

Damiano, sorry about the narrow defeat in Tour de Suisse. You were close to a stage win twice during the race and end up with second overall. What positive things did you take with you from Switzerland?
Of course I would have preferred to win Tour de Suisse and losing the success for only 4” is even tougher. But I always like to look at the positive side of every thing, so I focused my attention on the fact that I showed to be very competitive in the climbs, that I can aim to win vwery tough stages and that I can manage intense situation during races. These are all signals that support my morale.

Except for yourself who did you see as the strongest in Tour de Suisse?
I think that some of them, for instance Andy Schleck, didn't want to perform Tour de Suisse on a competitive level, they only wanted to perform trainings. Others, such Leipheimer and Mollema, were already on a high level of condition, they were pedaling in a very good way, so I think they'll be able to obtain satisfactions in the Tour de France.

I made an interview with you last year right before the Tour. Back then you said you targeted ‘a beautiful stage win thanks to a great break-away’ but not the GC. How about this year? Will you aim at the overall classification this time?
No, I'm happy to start this Tour de France with no pressure on me about the overall standing. I only want to fix targets day by day, stage by stages. I would like to win my stage, this is my first target, then my goal will be to win another one and so on. If, step by step, I'll be able to achieve important results, I'll be happy. Of course, if my condition will be very good, as consequence I'll be in a good position of the overall standing, but this is not a primary target.

A lot of people say that the first week of the Tour is perfect for Philippe Gilbert, but isn’t it also perfect for Damiano Cunego? Many Ardennes-like finishes.
Yes, that's correct. The first stage was like an Amstel Gold Race final and in fact Gilbert performed an impressive action. I liked the stage and I like also others in the first week, so I'll try to obtain a good results in one of them.

I read earlier this year, that you thought about targeting the Polka-dot mountain jersey this year. How about that?
I'd like to wear the polka-dot jersey, it's a charming symbol, but in order to do it it's necessary to focus the attention on the breakways: the rules of the points for the climbers classifications changes, but it's still very important to get points in the early stages, so the breakaways are still a good method to collect points. Considering this, if I want to win stages, it would be quite difficult to compete for the polka-dot jersey too.

Looking at the Lampre Tour-team is seems very well structured around Petacchi for the sprints with Malori & Kostuyk to work in front of peloton and then Bole and Hondo to deliver him in the final. Who on the team is assigned to help you?
In Lampre-ISD we're lucky, because we can rely on riders that can support in the best way different kind of riders. Hondo is a very good “last-man” for Petacchi but, in arrival suche the one of Mont des Alouettes [stage 1, edt.], he performed a marvellous job for me, leading me on the wheel of Gilbert in the last 2 km. Bole can do the same thing in this kind of arrivals. Kostyuk, Bono and Loosli are very skilful in supporting me in the approach of the climbs, then I'll have Bertagnolli by my side on the mountains, where it will be my turn to give my best, after the support that I'll have received by the team mates.

Alpe d’Huez is back on the menu this year. Do you have some unfinished business after Fränk Schleck beat you back in 2006?
Alpe d'Huez is a top charming stage for all that it means to the history of Tour de France and for what it means to me. I dream of winning there.

And Pinerolo?
Of course, also Pinerolo arrival will be very important for the Italians and I think that I'd give a huge satisfaction to my team and to all the Italian fans if I could win there.

Last one. Saying Contador, despite his time lost on stage 1, and Andy Schleck will take 1st & 2nd in Paris, who's going to to join them on the podium?
Pay attention to Evans, Gesink and to Vinokourov.

Thanks Damiano, good luck!
Thank you, I hope I'll be able to give good cycling emotions to all the fans.
Posted by Mikkel Condé at 8:00 PM