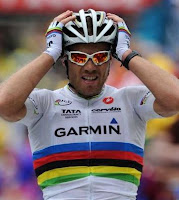 Thor Hushovd once again amazed the whole cycling world, taking his first individual stage win in this year's Tour de France. Big Thor was the first to attack on Aubisque and even though he was two minutes behind Jeremy Roy at the top of the HC climb, the managed to take it all back on the descent and fly by Roy on the final km.

Non of the 4 experts had put Thor Hushovd down for the win today, but it could very well have been that way! When I talked with Laura Meseguer yesterday about her pick she actually pointed at Thor Hushovd as winner before ending up picking Philippe Gilbert. After the stage she sent out the following tweet:

@Laura_Meseguer: S**** yesterday I changed my pick from Hushovd to Gilbert. alwayslistenthefirstdecision

And just a few minutes later ex-rider David Etxebarria tweeted that he had the same plan, but also ended up picking Gilbert instead of the Norwegian Thunder God.

So remember, always, follow your instinct! ;-)
Posted by Mikkel Condé at 7:53 PM