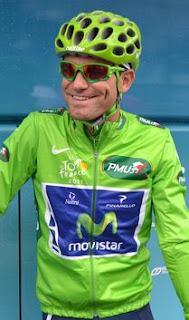 After the most tragic month in the history of the team, the hope and smiles now start to come back at Team Movistar. Juan Mauricio Soler's condition is getting better and better every day and green jersey aspirant José Joaquin Rojas has showed to be just as strong as we all wished for - Well, I know I did!

Rojas was the only one of the fast guys able to follow Thor Hushovd on stage1 and afterwards he followed up with strong performances on stage3 and 4. On top of that both Andrey Amador and Beñat Intxausti (read my pre-tour interview with Beñat here) seem to be recovering well from their injuries caused by the crashes on the first stage. Beñat Intxausti even managed to stick with the favorites on Mur de Bretagne! Hopefully he will be back at 100% for the mountains - keep an eye on him...

The next four stages all look good - on paper - for the new Spanish champion Rojillas, and I really, really, hope he can give Team Movistar that Tour-stage that would mean so much for everyone involved! Ánimo!
Posted by Mikkel Condé at 11:46 PM