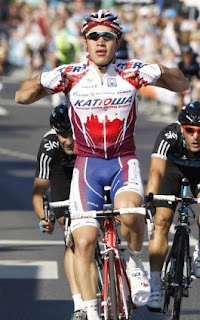 Denis Galimzyanov is a new name on the international sprint scene but just as difficult as his last name might seem to pronounce, just as fast is he on the final meters in mass sprint! I will even put him down as my personal outsider for the win on stage 3. Here is what the young Russian had to say about his chances in the Tour.

Denis, after your great stage win in Luxembourg and ending up 13th in the Russian Nationals, how do you feel right now?
I’m feel good. I will try to put myself in show and then we will see.

You have been very consistent in the top5 in almost all your sprints this year. Do you think it will continue in the Tour where the level is that much higher?
It's true the level here is the highest in the world, but the adversaries are the same as always. So I expect to take, more or less, the same results as earlier this year, hoping for a stage win!

Are you aiming for the green jersey?
Well, every sprinter thinks about green jersey at Tour de France. I want to finish the race because until the 15th stage there are a lot of options for sprint finishes.

Your Katusha team is 100 % Russian this year in the Tour. Does that bring any extra pressure to perform?
No, for me it does not change anything. At this level the nationality doesn't mean much. However it's a pity that a young sprinter like Porsev is not here. He’s young but he has the quality to be a good last man to lead out my sprints.

Last one. Does the team have any GC-plans this year? I'm thinking about Karpets & Gusev...
I think Karpets it’s a little bit stronger than Gusev for the GC, but this year the main goal for the team is to win a stage.
Posted by Mikkel Condé at 7:28 PM