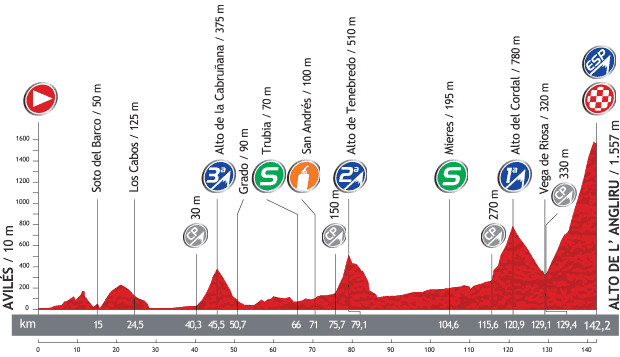 Joaquim ’Purito’ Rodriguez finally took his first stage win of this year’s Vuelta on stage 19. Katusha worked in front of the peloton all day long and with one kilometer to go, Purito dropped the rest of the favorites. Vincenzo Nibali couldn’t keep up with Horner on the final meters and Chris Horner is now leading the race with three seconds.

Before the Vuelta started, we could only hope for a fight this close and Angliru will now determine who’s going to win this bike race. Chris Horner has been the best climber so far and usually the best climber wins on Angliru. In the past, the big favorites have won here and I doubt that will change this time. The bonus seconds on the line can prove to be very important and the prestige alone of winning on Angliru should mean we won’t see the peloton let the early break get too far away.

It’s a short stage of only 142.2 km but it won’t be an easy day in the saddle. Even though the chances of a breakaway making it aren’t great, half the peloton will try to make it into that break anyway. It’s the last chance before Madrid to win a stage and strong teams like Movistar, Lampre and Euskaltel are still winless in this Vuelta. Except for the opening team time trial Astana hasn’t won anything either yet and without having to control the race, we may see them send a good climber up the road. If not to win the stage, then at least to help Nibali on the final climb.

There are three categorized climbs on the menu before taking on Alto de l’Angliru and all three of them are very steep. The first one, Alto de la Cabruñana, is the easiest one. It comes after 40 km and has an average gradient of 6.6 %. From the top, there are only 30 km to Alto de Tenebredo starts. This climb is only 3.4 km long but it has an average gradient of over 10 %! The GC favorites won’t be dropped here but the steep gradients will hurt their legs before the final two climbs of the day.

With 26.6 km to go, it’s time to climb Alto del Cordal. This is a category 1 climb and the 5.3 km towards the top has an average gradient of 9.6 %. If Alejandro Valverde or Joaquim Purito are feeling exceptional well, we may see Movistar and Katusha set a high pace on Cordal in order to tire out their rivals. There won’t be many riders left in the peloton when reaching the top and those who are dropped won’t see the front of the peloton again today. After the fast decent, the riders start on Angliru right away. This climb is said to be the hardest one ever done in a bike race and its 12.2 km with an average of 10.2 % confirm that.

This is only the 6th time a stage finishes on Angliru and looking at some of the past winners, it’s clear this is one for the pure climbers. Jimenez, Simoni, Heras and Contador were all best in the world when they won here. Juanjo Cobo was the last winner on Angliru (in 2011). That year the Vuelta also had a stage finish on Peña Cabarga. Last Thursday Chris Horner sat a new record on the climb. He was more than 40 seconds faster than Cobo was in 2011.

Naturally, Chris Horner is the big favorite to win this stage. However, Vincenzo Nibali has a point when he says the climb suits the Italian better than Horner. Angliru is all about keeping a steady rhythm, sitting on the bike. Horner is always standing in the pedals and should it rain, it won’t be easy for him to distance the others. It’s true that Horner is better than the rest on the steep gradients right now but Angliru is constantly steep and therefore it’s more important to keep a steady rhythm. Also, Horner has never climbed Angliru before. Nibali has.

Like in the Tour, Purito seems to be very strong after the last rest day. However, after his win on Alto de Naranco he also said that “this was his last chance”. He knows it will be extremely difficult to win on Angliru and he’s probably more focused on gaining time on Valverde than going for the stage win. However, this climb suits Alejandro Valverde very well. The Movistar leader knows how to keep a high speed and honestly, I don’t think Purito will be able to distance Valverde enough to make podium. Actually, I doubt he will distance Valverde at all. The only chance for Purito to take 3rd place is if Nibali has a - very - bad day. In 2011, Liquigas sat a strong pace for Vincenzo Nibali in the bottom of Angliru but halfway to the top, Nibali couldn’t follow anymore and he ended up losing 2:37 min to Juanjo Cobo. I doubt it will happen again this time but if Radioshack, Movistar and Katusha work together and put pressure on Nibali already on Cordal, he may crack again on Angliru.

As mentioned, Movistar, Lampre and Euskaltel haven’t won a single stage in this year’s race and they will all be eager to change that fact today. Eros Capecchi and José Herrada are probably the two best cards Movistar can play in a breakaway. Capecchi was very good on Angliru in 2011 and it’s important to know this climb. I had Diego Ulissi down as my joker for stage 19 and he finished 2nd after Purito. Ulissi seems to have timed his shape perfectly for the World Championships and if he gets into the break, he will be very difficult to beat.

A steep climb like Angliru is always good for the pure climbers and Euskaltel has a lot of them. Mikel Nieve and Igor Antón are both out of the GC and will have freedom to attack. In 2011, Antón put in a strong attack with 7 km to go and for a time, he seemed to be the winner. However, he couldn’t follow when Cobo made his move. Back then, Antón attacked from the peloton. He ended up losing 1:21 min but imagine what he can do with a gap of 3 minutes in the bottom of the climb. Igor Antón has won on Monte Zoncolan in the past (2011) - the Italian pendant to Angliru - and he’s always been best on the steepest gradients.

It would be a smart move by Astana to send a rider or two in the early breakaway. They don’t have to control the race anymore and they would be happy to see the bonus seconds taken out of the equation if Nibali can't follow Horner. Tanel Kangert and Paolo Tiralongo will most likely stay with Nibali. Kangert sits 11th overall and Tiralongo never leaves Nibali’s side. Not even when the doctors advised him to do so when he was sick during the Giro. I think Janez Brajkovic and Jakob Fuglsang may fancy their chances. Brajkovic was the first rider in the Red Jersey and he’s been looking strong, working for Nibali, ever since. Before the Vuelta started, Fuglsang said he came to support Nibali and prepare for the World Championships. So far, he’s been riding very well without going over his limits. In the beginning, Fuglsang was aiming for a stage win but he became locked after Nibali took the jersey early in the race. Now he has a chance, his last chance, and it would be a shame to waste it. At least to get a strong day of racing before Florence.


For this final day in the mountains, Laura picks Alejandro Valverde to win.