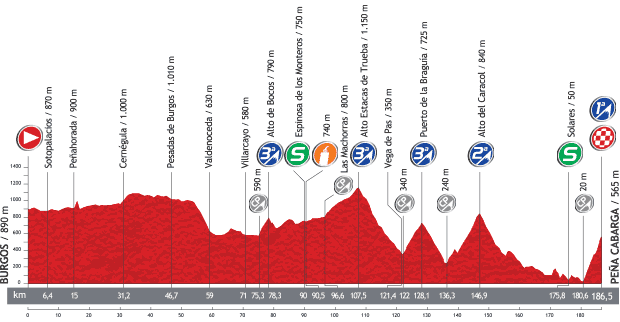 Team Saxo-Tinkoff did it again. They took the peloton by surprise in the crosswind and managed to distance Domenico Pozzovivo by 1:30 min. Nicolas Roche is therefore now back in Top5 - his big goal - and it will be interesting to see what Pozzovivo can do to take back the time he lost.

Stage 18 provides the first opportunity to change the overall classification. The 186.5 km include no less than five categorized climbs and the last one, Peña Cabarga, is one of the toughest in this year’s Vuelta a España. The day starts in Burgos where the riders head north. A light headwind will accompany the peloton for most of the day and we can expect another hard day in the saddle.

The breakaway has a good chance of making it all the way again and it will be a furious fight to get into that final break. There are no real climbs the first 75 km it won’t be a surprise if the break doesn’t get away for good until they hit the first climb. Alto de Bocos is only 3 km long but its average gradient of 6.6 % will show who has the legs to be in front today.

The following three climbs come right after each other and the penultimate one, Alto del Caracol, has its top just 40 km from the finishing line. The run-in towards the final climb is up and down at all the time and nobody will arrive at the bottom of Peña Cabarga with fresh legs. There is an intermediate sprint in Solares with just 10 km to go and in case the break is caught, we may see the GC riders sprint for the three bonus seconds.

As the riders gets close to the final ascent, the roads turns 180° which means the peloton will start the last climb with a light tailwind. Peña Cabarga is 5.9 km long and has an average gradient of 9.2 %. There are even parts of over 20 % on the last kilometer. In 2011, Chris Froome took his first GrandTour stage win, when he outsprinted Juanjo Cobo on the final meters. Back then, Cobo attack with 1 km to go and at this point, they were still 10 riders left in front group. This time we may see attacks a bit earlier. Valverde and Purito can’t wait to the last kilometer and the TV-viewers can enjoy a great fight this Thursday afternoon. As Chris Horner says:  “Grab your beer and get ready for the show!”

Chris Horner still seems to be the strongest rider uphill in this race and it’s difficult to imagine why it would change now. Astana will be happy if a breakaway makes it and thereby takes the bonus seconds on the line. Vincenzo Nibali didn’t look too good the other day, however I’m sure the Italian is only getting better. It won’t be easy to drop him on the steep percentages. Tanel Kangert, Janez Brajkovic and Jakob Fuglsang will all be there to support Nibali in the final and probably Paolo Tiralongo as well. Chris Horner only has Robert Kiserlovski left to help but then again, the Croatian champion is probably among the best climbers in the race right now. Kiserlovski can’t afford to have a bad day though - in that case, Horner will be completely isolated.

It will be very interesting to see how Movistar will ride this stage. They haven’t won a single stage yet and they must be eager to finally cross the line first. Before the stage to Formigal, Alejandro Valverde seemed happy just to take 3rd place overall but not anymore. Valverde now eyes the Red Jersey and he says he won’t be afraid of attacking from a far - and to risk losing everything - if he sees an opening. However, it’s important to remember that Valverde doesn’t know the Peña Cabarga ascent. He decided to rest after the Tour instead of going to check out the climb.

Joaquim ‘Purito’ Rodriguez is probably on the same page in the tactic book as Valverde. He showed he is now strong enough to drop the other GC riders uphill and on the steep percentages on Peña Cabarga, Purito has to try again. I would imagine Dani Moreno to set a high pace in the beginning of the climb in order for Purito to attack when gradients get over 10 %. Purito already knows what it takes to win on Peña Cabarga. He won here in 2010 when he distanced Nibali with 20 seconds after a late attack with just 800 meters to go.

Domenico Pozzovivo lost his 5th place overall in the crosswind on stage 17 and he will be eager to take it back from Nicolas Roche. The steep climbs suits Pozzovivo perfectly and with only 53 kg to carry, he should be able to distance Roche in the final. He probably won’t take back all the time he lost in the wind but he will get closer.

As stated, the breakaway has a good chance of making it again. It would suit Astana perfectly if the bonus seconds weren’t up for grabs and Movistar and Katusha may be too focused on the battle for the GC to control the peloton. However, if Valverde and Purito wants a stage win from this year’s Vuelta this is an opportunity they can’t afford to miss. Anyway, in case a break makes it all the way, let’s take a look at some of the best candidates.

First up is Michele Scarponi. The Italian is very strong right now and has been good at hitting the right breaks. Scarponi can’t drop the best riders uphill anymore but he showed the other day, that he is in great shape. He finished second after Alexandre Geniez and was one of the few riders able to take back time on the Frenchman on the last climb. Why he let him get away in first place is a mystery. One thing talking against Scarponi is that he’s only 12:08 min after Vincenzo Nibali. At this point in the race, the team start to protect their Top10 places and they may not let Scarponi get too much of a gap.

Euskaltel are trying hard to get a stage win in their last Vuelta and I’m sure they will do whatever they can in order to put a strong climber in the early breakaway. Igor Antón and Mikel Nieve are not big threats in the GC and especially Antón seems to be doing pretty well right now. Another Spanish climber who’s getting better and better is David Arroyo. He came to race in great shape but crashed in one of the first stages. Slowly Arroyo is getting back at a high level and he’s now less than a minute from breaking into Top10 overall. The final climb suits Arroyo just fine but he won’t be able to drop the other GC riders. If he wants to give Caja Rural a stage win, he needs to attack from a far. Like Scarponi, it won’t be easy to get a big gap but you never know this late in the race.

For other good candidates look to riders like Amets Txurruka, Nicolas Edet, Georg Preidler, Ivan Santaromita, Diego Ulissi, Rafal Majka, Dario Cataldo and Yoann Bagot. Bagot is right now 22nd in the overall classification but he needs four minutes to make into Top20. So far, the French riders have been very good in this Vuelta and I can’t see why Warren Barguil shouldn’t be able to make a hat-trick. He’s obviously in outstanding shape right now and despite his inexperience Barguil really knows how to hit the right breakaway!