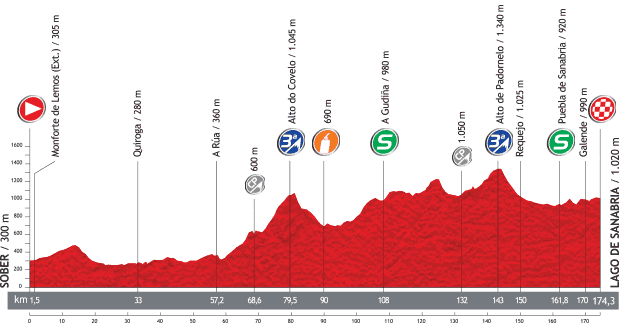 On stage 2, Dani Moreno waited too long when Nicolas Roche attacked. That mistake cost him the stage win. Tuesday afternoon, Moreno took no chances when he attacked from afar and managed to keep Fabian Cancellara and the rest of the peloton behind him. Cancellara’s strong effort probably made the gap among the favorites, which made Chris Horner lose the Red Jersey to Vincenzo Nibali. However, the American doesn’t seem too upset over losing the jersey. “It’s ok for now. I will use my good legs to get it back”, he says.

Astana shouldn’t have problems keeping the jersey on Stage 5 even though it won’t be an easy day in the saddle. There are only two categorized climb on profile but the 174.3 km from Sober to Lago de Sanabria include numerous hills. Officially, the first climb Alto do Covelo doesn’t start until after 68.6 km. However, at this point the road has already been going uphill for the past 11 km.

With 42.3 km to go, the final categorized climb of the day begins. Alto de Padornelo is 11 km long but with an average of just 2.6 % it won’t make for a huge selection in peloton. It gets steeper towards the top but strong sprinters like Gianni Meersman, Michael Matthews and Edvald Boasson Hagen won’t have problems staying in front.

Coming down from Alto de Padornelo the final 20 km may look flat but don’t be fooled. We are in Spain and that means you shouldn’t trust the road book when it comes to “flat” parts. The last 10 km are constantly up and down and there is a part of 1.5 km with an average gradient of 4.3 % as the peloton enters Cubelo with 6 km to go. A tailwind will help the riders keep a high pace the final 5 km and without any sharp corners; it will be a fast finish. However, this is the Vuelta and it can’t surprise anybody that the race organizers have put in a 90° corner with just 600 meters to go. This will stretch out the peloton significantly and it’s important to be near the front at this point. Preferably with two teammates in front of you.

Dani Moreno took the peloton by surprise on stage 4 but with a flat finish, guys like Meersman, Matthews and Boasson Hagen should be able to fight for the win. It’s a tough day and I’m not quite sure the pure sprinters will manage to stay in the peloton. The joker picks for a sprint are the same as those for stage 4. Meaning riders like Reinardt Janse van Rensburg, Grega Bole and Anthony Roux.

There is a good chance of this stage finishing in a bunch sprint but it wouldn’t be a surprise to see a breakaway making it all the way. It could be the morning breakaway and it could be a late breakaway on Alto de Padornelo. Vincenzo Nibali is not interested in losing the Red Jersey again so we have to look to riders already out of the GC for possible breakaway candidates.

Amets Txurruka is 4:33 min behind in the overall classification and the Basque rider is a true breakaway specialist. Txurruka is in great shape right now and has already tried to breakaway twice within the last couple of days. Another strong rider down the GC who is in good shape is Juan Antonio Flecha. He has attacked on the last kilometers the last two days in a row but without success. Flecha is obviously going strong right now but maybe he’ll have more luck with an attack from afar.

The TV-viewers have been spoiled with images of the beautiful scenery in Galicia and with the finish line next to Lago de Sanabria, this will be another spectacular stage to watch.

For Stage 5, Laura thinks a breakaway will make it and picks Thomas de Gendt to win.