A flat time trial might not make for good TV viewing but it’s Act 1 in the duel between Alberto Contador and Chris Froome and the first time we get to see the relative form of all the other candidates to win this race and the Tour de France. 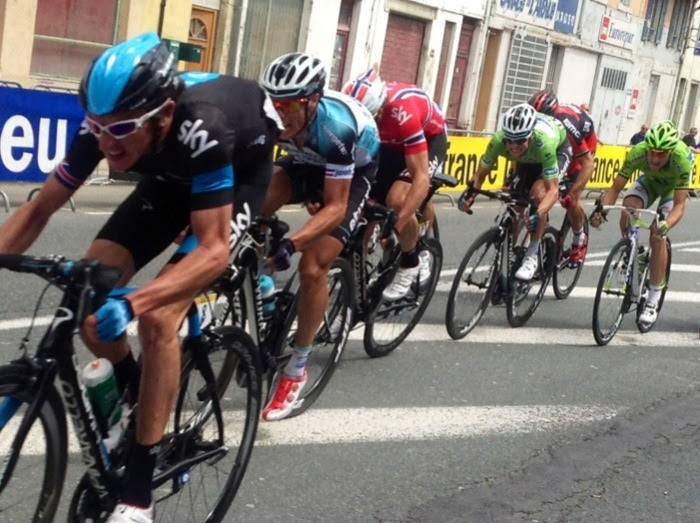 Stage 3 Wrap: I’d picked Edvald Boasson Hagen for Stage 1 but he wasn’t in the mix nor yesterday so his return was a surprise. The fast finish saw the bunch strung out through the final corners and Boasson Hagen timed his move perfectly.
The Route: flat. Normally the vertical gain of each stage is listed by the race organisers but it’s not worth listing this time. The route runs through the Dombes, a relatively small area of land but where about one fifth of France’s lakes are concentrated and the roads are exposed on embankments above the water. It’s still scenic but technically similar to a time trial in the Netherlands. But the roads do undulate in places and knowing when to change gear will play a role although for the most part it’s all about turning a huge gear.
The Scenario: normally there’d be Tony Martin and then everyone else. The world time trial champion would be expected to blitz the course with his mix of raw power and technical proficiency. But he’s been laid low by a stomach problems and almost didn’t start Stage 3. So the result could depend on the state of Martin’s intestines rather than his legs and lungs.
Behind we’ll see how Alberto Contador and Chris Froome fare. They’ve only raced four time trials together and Froome has finished faster three times so history is on the British rider’s side. But it’ll be interesting to see how they fare as the Tour de France has a flat 33km time trial on Stage 11 which is just 35 days away so there’s not much room to improve. Froome’s visited a wind tunnel for the first time in his career in recent months. We’ll see if he’s improved his time trial position, at least in style via TV images.
Others to watch include Richie Porte who might prefer a hillier route but can win outright, Geraint Thomas too. This is also the case for their ex-team mate Michael Rogers now at Saxo-Tinkoff. Jurgen Van Den Broeck should make the top-5 like he always does. Lieuwe Westra had a big crash on Stage 2 and went for x-rays, he’s back in the race but this is bound to hurt. Sylvain Chavanel’s powerful against the watch and reigning French champion and he’s been active in the last few days.. a sign he’s ready to waste or has he tired himself out? His team mate Michał Kwiatkowski is one to watch, he’s a talent for the future and it takes time to learn how to ride against the clock. Talking of progress, Movistar’s Jonathan Castroviejo has been fast in short distance events, can he improve over 32km? Finally NetApp probably won’t win but the likes of Alexander Wetterhall and Jan Barta are strong on a flat course like this.
Weather: a pleasant day with sunshine and almost no wind. The forecast says a 5km/h breeze coming from the north-west meaning a tiny headwind on the way back.
TV: the last rider is forecast to arrive at 2.38pm Euro time with Froome and Contador finishing around 2.15pm so tune in for the last hour to watch the main names in action. cyclingfans.com and steephill.tv have the links to video streams if you can’t get it on TV.
Local rider: Fumiyuki Beppu of Orica-Greenedge might be the last name you’d pick for a local. But the Japanese rider from Chigasaki on an Australian team lives 10km from the course today and so he’s out on his training roads. In fact he was on them for Stage 3 when he got in the day’s early breakaway too. Beppu is probably the most French of all the Japanese pros, having lived in France for some time after racing as an amateur with the VC La Pomme team, even more so than Yukiya Arashiro who’s spent years with in the French amateur ranks, signed for BBox and now riders with Europcar. Many Japanese riders find the French diet a shock but Beppu is the kind of rider who eats a croissant for breakfast now and then.
Posted by Mikkel Condé at 9:41 PM