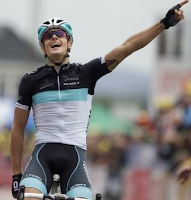 Jakob Fuglsang now finally seems ready to lead his team in one of the three Grand Tours. Giro d’Italia next year starts in Denmark and after spending the last couple of years working for other riders Jakob Fuglsang now wants to be the sole team leader in the Italian GT.

Fuglsang did get the chance as captain in the Vuelta last year, but after his injury in the Tour a month earlier he didn’t managed to stay with the best riders on the steep parts in the mountains, despite getting the Red jersey right from the beginning of the race. The Danish climber admits he didn’t have the best preparation but that will change next year with the Giro on the menu.

“I’m sure that if I do what is needed and I do it down to the smallest detail, I will be able to be right up there with the best rider”, Fulgsang explained about a month ago.

One of the things Jakob Fuglsang needs to get under control is his weight. According to his Danish manager Kim Andersen; “he must lose two per cent of body fat. Otherwise he can’t make it all the way up the steep mountains. If he loses the weight and is in good shape, then he can be right up there," Andersen told Danish television TV2.

Another important thing for Jakob Fuglsang is the change of mentality. As I said he has been supporting team leaders the last couple of years, simply because he needed experience in the races and wasn’t ready yet. Frank and Andy Schleck have been very grateful for that support, but now it looks like they won’t have their Danish sidekick to help them in the Tour de France next year. Something has changed.

“After the Giro I want to focus on the Olympics, the Vuelta and the World Champions. The World Champions route is definitely not bad for me. I rather want the opportunity to get some results myself instead just helping other riders in the Tour”, Fuglsang told feltet.dk.

Earlier Jakob Fuglsang has been happy to help his two good friends, but it sure seems like the Dane is now ready to fly solo. Of course the Giro-start in Denmark is an extra motivation and if he could take the jersey while the race is still on Danish ground it would be an amazing start for him. The ambitions are definitely there and even though he is up against riders like Ivan Basso, José Rujano, Roman Kreuziger and Michele Scarponi he believes the podium is within his reach.

“I aim for the podium and I think that’s realistic. It's obviously a possibility to grab the pink jersey in Denmark and I will do everything I can to do it”.

I personally don’t believe Jakob Fuglsang can win the Giro d’Italia but I do think top5 is possible and hopefully even more. If he gets that weight a bit down he can do better in the steep selective parts and that will be crucial for stepping on the podium in Milano. I think he will end 3-5 in the GC.
Posted by Mikkel Condé at 1:26 PM