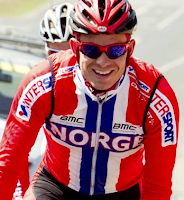 Alexander Kristoff is yet another future top rider coming out of Norway these years. His speed and characteristics gives him the perfect opportunities to become the next Norwegian top sprinter in the peloton. Coming from Joker - Bianchi to BMC this season, he will now join forces with Denis Galimzyanov at Katusha next year as a very strong and fast duo for the mass sprints.

Alexander. To start out, how will you describe your season this year?
I had an OK season. I was hoping to win some races this year and I only won 1 race (Nationals) so if you look at it that way it was not that successful. But feel I have grown as a rider since last year. I finished my first Grand Tour and got better results than last year with more top 5 results through the year.

Compared to last year, what has changed this year? Can you feel the improvement?
Generally, I feel stronger. I know a little bit more about how to work as a professional and how I can prepare myself better before the races.

In your opinion, what has been your best race this year?
It is always a good feeling to win so I have to say that my National Championship victory is the best this year. I also had a good period after my summer training with a 2nd and 3rd place in Tour de Wallonie followed by a 2nd place in Tour de Pologne.

You came very close to top3 spot on the Giro stage Gatto won, when Petacchi overtook you with a few centimeters. How will you describe your first Grand Tour experience?
It was a good experience when I look back. When I was there in the middle of all the mountains it was not very pleasant though. It was incredible hard! One day I had a total of 9 hours ride time with neutral and riding back to the bus. But I got some okay results in my first Grand Tour like that 4th place. You can always hope for more and if I had had a little bit of luck, maybe I would have ended 2nd on that stage, but that’s cycling.

When BMC announced the signing of Thor Hushovd, it only took you 10 days to announce your move to Katusha. Did the signing of Hushovd, as sprinter, have anything to do with your change of team?
No. I got the message from BMC, that I had to look for another team, right after the Giro, before I knew that Thor was coming to the team. It was nice of BMC to give me this message so early. That gave me the opportunity to start looking for other teams early on, and then it wasn’t a problem to find a new one. It would have been worse if I thought I could stay and then got the same message in September.

At BMC you were the main sprinter, but at Katusha they already have Galimzyanov. What will your role be at the Russian team?
I will have a meeting with Katusha in some days to figure out my calendar for next season. But I want to do one Grand Tour and some classics like Milano - San Remo. I will of course have to work with Galimzyanov and I look forward to help him in sprints - I think I can learn a lot from him. I also got signals from Katusha that they want to work with me as a sprinter and I will probably get my chances in other races where Galimzyanov is not racing or if he’s not in shape.

Is there a specific race on the 2012 calendar that you dream of winning?
When I was a kid I was dreaming about winning a stage in Tour de France, but to be more realistic I hope of winning more than one race next year. Maybe I can win a race like Vattenfall Classic, I have done this race 2 years now and I always felt good there. I will try to work hard this winter and be more prepared for the season opening, since I normally have a little bit of troubles getting started.

Despite only having a handful of riders in the peloton, Norway seems to produce one top sprinter after the other. What do you think the secret of this impressive tendency is?
Maybe, it’s how we are build or how we train. I am not sure, but it’s a fact that we have fast guys. This year we where 6 pro-riders and 3 of them are “sprinters” even though I have to say that Thor and Edvald are more than sprinters, they win many types of races.
Posted by Mikkel Condé at 10:54 AM