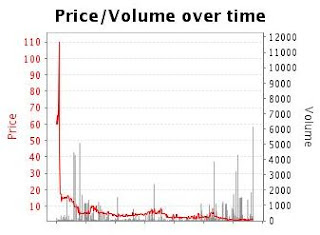 Who is going to win the race today? Maybe you need to update your manager team, maybe you are planning to put down a little money on the race or maybe you are just generally interesting in cycling. Whatever your reasons are to ask this question, the answer is very simple; follow the money - and then you will see.


Some people like to follow the expert’s picks – as you have been doing at this very site during the Tour and the Vuelta – while some prefers to follow their favorite tipster. You can get good picks this way, but if you want the great tips, you have to pay close attention to the bookmakers. Not on who the bookmakers think will win – let’s face it, they don’t really know more than you anyway – but pay attention to the riders whose odds suddenly start to drop heavily. It takes some time see it, but when you get the hang of it, it’s easy to see who the real favorites are.

Let me show you a couple of examples.

Giro d’Italia, stage 17 - May 25th.
On paper a typical breakaway stage. One of those stages where half of the peloton wants to give a shot and see what happens. As those of you who follow cycling closely know, this stage had names like Giovanni Visconti & Pablo Lastras written all over it and just like that both riders managed to get into the right breakaway. A coincident? No. These riders are experts in hitting the right breaks and therefore the odds on Visconti & Lastras aren’t very high at the start of the stage (around odds 10-20). The odds on a guy like Diego Ulissi are on the other hand much, much higher. Starting in around 200 or 300.

So, you might ask, how are you supposed to know that Ulissi is a good pick for this specific stage when the odds are so much higher on him than on ‘favorites’ like Visconti and Lastras? Well, this is where my thesis from before comes in handy – follow the money! It’s no secret that most bets on the cycling are placed in the final hours before the race starts. Therefore it’s a good idea to keep an open eye on the odds at this time. If you did back then, you would have had witness something very interesting. Suddenly the odds on Ulissi started to drop, from 300 to 200. From 200 to 100 and from 100 down to 40. It’s true that odds 40 still is a very high odds, but with the money placed on Ulissi it was easy to see that someone knew he was on fire that day. 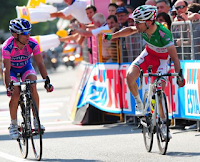 6 hours later Diego Ulissi had won the stage. It’s true that he won because Visconti got disqualified in the sprint, but if you had bought Ulissi at odds 300 (or just 100) you would have been able to lay him on betting exchanges such as Betfair at odds 2 during the stage. In other words you would have been able to make a huge profit no matter what would have happen in the final sprint if you had followed the money and placed a bet on Ulissi when the odds on him started to drop.

Another example is from Paris-Tours last Sunday.
Usually the markets on cycling are very low at this point of the season. Meaning that the list of 20+ bookmakers with odds on the Tour de France is reduced to only a very few for Paris-Tours. One of these bookmakers is Betfair, but as always with these late season races, the liquidity is very low. That means that when the total amount of euro placed isn’t higher than a few thousands (many, many, many times lower than during the Tour) and then suddenly a rider at odds 100+ starting to get 20% of money it raises a few eyebrows. Or at least it should do! 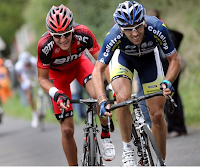 The rider I’m talking about is Marco Marcato from Vacansoleil-DCM. Marcato sure seemed to be in the shape of his life, doing top10 in both of the Canadian races and winning Tour de Vendée just a week before, but to drop all the way down to odds 30 did seem a little off. Riders like Philippe Gilbert, Oscar Freire, Robbie McEwen, Sylvain Chavanel and the new World Champion Mark Cavendish were all to be considered as the big favorites for the race, and therefore it stands out when the few money on the race suddenly go to Marcato at such a high odds.

But just as the case with Diego Ulissi, Marco Marcato turned out to be the smart bet ending 2nd in the race behind Greg Van Avermaet. Starting at odds 100+ to win and odds 25 for a top3 spot, the Italian Vacansoleil-DCM rider sure made a few punters go to sleep happy that Sunday.

I could give a lot of examples like these two, but I think you got the basic idea now. So remember, if you want to get best picks for a race, always follow the money!
Posted by Mikkel Condé at 12:44 PM