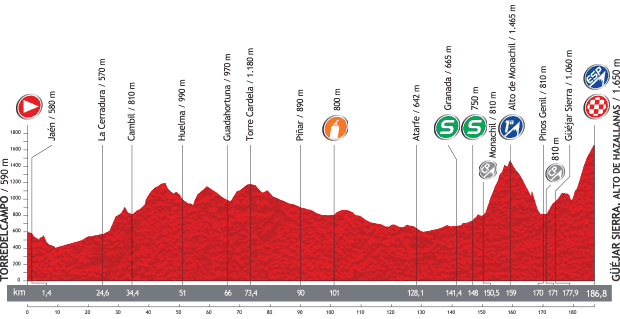 Katusha did exactly what we expected on stage 9 and Dani Moreno showed how strong he is right now. Nicolas Roche lost the Red Jersey by one second to Moreno and it will be interesting to see who will lead the race after Monday’s extremely tough day in the mountains.

Stage 10 is the last day to overcome before the first rest day of the race. On paper, this is a good stage for a breakaway to make it but it has to be a break of very strong riders. The first 74 km don’t include any categorized climbs but there are several long hills which will make for a hard start of this stage. Everybody knows the breakaway has a chance today and therefore we can expect a fast start with many attacks.

The first part of the stage is tough but it’s nothing compared to the final 36 km. Alto de Monachil starts after 150 km in the saddle. The 8.5 km towards the top have an average gradient of 7.7 % and the first four kilometers are very steep. There are just 27.8 to go from the top of Alto de Monachil and after a descent, which is not easy at all, Alto de Hazallanas starts right away.

The first 5 kilometers have an average gradient of 5 %. The following 3-4 km are more or less flat and after a descent through Güéjar Sierra, the actually climb begins. The final 7 km kick up with 8.5 % and there are numerous parts of over 15 %. With two kilometers to go the gradients almost reach 20 % and this will be a perfect place for the pure climbers to put in a strong attack. The final km is not very steep and the stage actually ends with a little descent towards the line.

So far Dani Moreno has been the strongest rider uphill in the race and it’ difficult to see him losing the Red Jersey. However, the time differences between the first five are still very small. Horner, in fifth place, is only 28 seconds behind Moreno. It’s now up to Katusha to control the race and I’m personally looking forward to see when/if Purito attacks. He doesn’t seem to be on top of his game right now but he needs to take back time on Nibali and the other GC riders. The steep gradients suit Purito perfectly and even if he can’t drop his rivals, he can lead the way for Dani Moreno to attack in the final and extend his lead.

Compared to the steady uphill finish on Saturday, this final climb doesn’t suit Ivan Basso very well. The Cannondale captain is without a doubt in great shape right now but the constant change of rhythm is not good for Basso. That being said, if Basso shows the same strength as the other day, he won’t lose much time to guys like Moreno, Purito and Valverde.

Especially Alejandro Valverde will be interesting to follow on the final climb. I expect Movistar to put a rider in the morning breakaway and by that make Katusha do all the work in the peloton. Valverde hesitated a bit when Dani Moreno attacked on stage 9 but he still showed good legs by taking second place. In the last couple of uphill finishes, Valverde and Purito have waited until the final 500 meters by attacking their rivals. If they attack a bit earlier on Hazallanas, they could really take some time. Also, if the peloton catches the breakaway, it will be difficult to beat Valverde in a finish like this one.

Chris Horner had big hopes for Saturday’s uphill finish but after a couple of strong attacks, he couldn’t respond when Roche, Basso and Moreno went away. Horner likes it steep but not on a short distance as in Valdepeñas de Jaén. Alto de Hazallanas is a perfect climb for the American veteran and I’m sure he will try to take back the Red Jersey.

On paper, Astana has one of the strongest teams in this year’s Vuelta. However, Vincenzo Nibali was very isolated the other day. Only Tanel Kangert was with him in the end and right now, it doesn’t seem like Nibali is on the same level as Dani Moreno and Nicolas Roche. It may come later in the race, I’m sure it does, but he still has work to do. His teammate Jakob Fuglsang has deliberately lost one minute after the other in order to drop out of the overall classification. Fuglsang aims at winning a stage after missing out in Dauphiné and in the Tour earlier this year. As pointed out, this is a good day for a breakaway and I wouldn’t be surprised to see Jakob Fuglsang in the break. Fuglsang is eager to win and he needs to take advantage of his post-Tour shape before it’s too late. If you’re looking for a joker for the stage win, I’ll suggest the Danish climber.

The final climb is also suiting riders like Domenico Pozzovivo, Thibaut Pinot, Sergio Henao and Leopold König very well. König has already shown his strength and even though I doubt he wins this stage, he should be able to stay near the favorites. Sergio Henao is 3:28 min after in the overall classification and even though there is still a long way to Madrid, he soon needs to start taking back time. Henao is a great climber and if he has the legs to do it, he should attack early on the final 7 kilometers. Pozzovivo started out this Vuelta aiming for top5 overall but he too has some ground to make up. The pint-sized Italian is not afraid of attacking from a far and this climb is pretty much perfect for him. If the other GC riders start looking at each other, I’m sure Pozzovivo will try to sneak away.


Eurosport is covering this year’s Vuelta a España intensively. Before and after each stage you will get inside information from the many interviews with the riders. The interviewer is Spanish journalist Laura Meseguer. She knows what’s going on inside the peloton and each day she will get you her own personal winner picks for the stage.