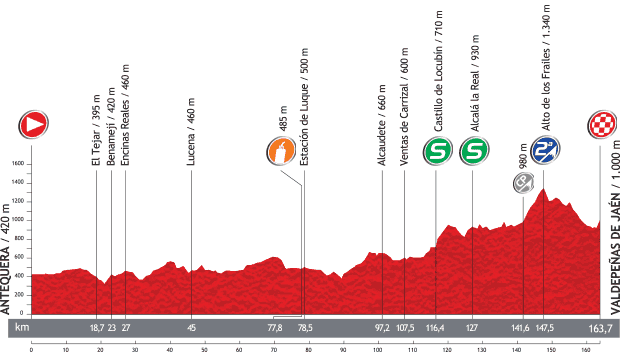 As suggested in the preview yesterday, we got the second Czech stage win in a row when Leopold König won stage 8. NetApp Endura had been working in front of the peloton for most of the day and this was truly an impressive victory for the wild card team.

Stage 9 is one I’ve personally been looking forward too. On paper, this is not a very demanding stage but the final 45 km are very tough. There aren’t any big climbs on the menu but with just 22 km to, the peloton faces Alto de la Frailes. The 6.2 km towards the top have an average gradient of 5.8 % and we can expect Katusha and Movistar to set a furious pace. Coming down from the top, the first 7 km are flat before the final kilometer rises towards the line. In 2010 and 2011 we had a single rider in front at this point (Uran in 2010 & Moncoutie in 2011) but you need almost a minute before the final kilometer if you want to make it all the way.

The final 1000 meters up to the finishing line is extremely steep. There are gradients of nearly 30 % and not surprisingly, Joaquim ‘Purito’ Rodriguez is the big favorite. In 2010, he attacked too early and ran out of gas as Igor Antón went away on the final 300 meters. In 2011, Purito took no chances. His teammate Dani Moreno hit the front as soon as the steep gradients started and only Purito, Vincenzo Nibali and Wout Poels managed to follow. Nibali couldn’t keep up the pace and like Antón the year before, Purito put in his final attack with 300 meters to go.

I expect the same scenario this year. The way I see it, nobody can beat Purito & Moreno on the finish like this one. Dani Moreno seems to be in the shape of his life right now and knowing that Purito is the team leader, I think they will try to repeat the performance from 2011. Vincenzo Nibali was the first to respond to Katusha’s attacks in 2010 and 2011 but it seems like he’s still missing a little bit at this point.

It starts to show that Alejandro Valverde wants to win the World Champions more than the Vuelta. However, few have Valverde’s killer instinct when he sees the line. The steep gradients are definitely better suited for Purito than for Valverde but compared to Nibali and Basso, Valverde should be able to gain a little time.

Nicolas Roche is new rider in the Red Jersey and as I pointed out in the overall preview, the Irishman seems to be extremely motivated to finally crack top5 overall in a Grand Tour. Roche finished 8th in Valdepeñas de Jaén in both 2010 and 2011. I think the Saxo-Tinkoff leader will probably lose 7-10 seconds to Purito on this stage and therefor Roche shouldn’t have problems keeping the Red Jersey. The only way - as I see it - that Roche can lose the jersey is if Moreno wins the stage - gets the 10 bonus seconds - and distances Roche with 7 seconds.

Another important factor at this point in the race is the fatigue. This is the 9th stage in a row without a rest day and many riders will be on the limits. Add to that the extreme temperatures the last couple of days. Samuel Sanchez, Roman Kreuziger & Bauke Mollema are already almost out of the GC and we could see a few more lose ground this Sunday. The time differences won’t be very big but if you have a bad day, you can easily lose 45 seconds on the final kilometer. It may not sound of much but it’s of huge psychological value.

It’s difficult to point at a joker for this stage. Purito and Moreno are in a league of their own on this kind of finishes and without Carlos Betancur in good shape, no one really has what it takes to beat them. Sergio Henao and Domenico Pozzovivo are both strong on the steep gradients but they need to attack right from the bottom if they want to win this stage. Pozzovivo’s teammate Rinaldo Nocentini is usually good on a finish like this but against the GC riders, I doubt he win. Igor Antón came close on stage 8 but I don’t think he has the same kick he had in 2010 when he won. Wout Poels too is far from his Vuelta shape from 2011 when he finished 2nd. A super joker could be Ivan Santaromita. The Italian champion is in great shape right now and with only 58 kg to carry, he has what it takes to stay in front on the steep gradients.

Last but not least, we can’t forget about the World Champion Philippe Gilbert. Like last year, he seems to be getting better and better as the Vuelta progresses. Had this been 2011, we all know who would win the stage. However, Gilbert doesn’t have the same kick he had two years ago and with parts of 30 %, I can’t see him beat Purito and Moreno. He may take 3rd place on the stage but to me, it would be a little surprising to see him take his first win in the rainbow jersey here.