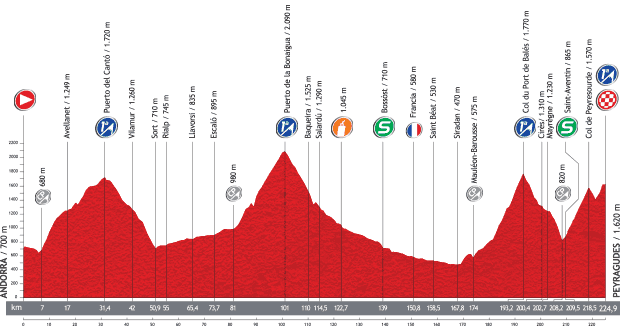 Daniele Ratto took a beautiful stage win in the rain when he soloed away to win on Collada de la Gallina. Belkin deserves to be mentioned as well though. The Dutch team put in play a brilliant plan but unfortunately, Luis León Sanchez crashed on the long descent and had to quit the race. So did Ivan Basso and since Purito and Valverde are not on top of their game, this Vuelta is down to the battle between Vincenzo Nibali and Chris Horner.

Stage 14 was a horrible day in the saddle for the riders and it won’t get any better this Sunday. In fact, it only gets worse as the stage is almost 100 km longer. The weather stays the same and there aren’t any less climbs on the menu. On paper, this is another good stage for a breakaway. The favorites will focus on each other and since Nibali and Horner are the strongest uphill, we probably won’t see Katusha and Movistar go hard for the stage win. At least not from the very beginning.

The riders start climbing after just 7 km of the stage when Puerto del Cantó starts. The 24.4 km towards the top have an average gradient of 4.2 %. It’s steepest in the beginning and we can expect a lot of attacks right from the start. From the top of Puerto del Cantó, there are still 50 km until the next climb starts and in tailwind, the breakaway has time to get a good gap.

After 81 km it’s time for Puerto de la Bonaigua. It’s another long climb - 20 km - and with an average gradient of 5,5 %, there won’t be many riders left in the peloton at the top. The descent is almost 65 km long and it’s extremely important to be wearing enough clothes. It will be a very cold day and if you forget to eat and stay warm, you probably won’t be able to cope with the tough final in France.

The last 50 km are the same as when Alejandro Valverde won on Peyragudes in the Tour de France last year. First Col du Port de Balés, then Col de Peyresourde and after a short descent it’s time for the final 4 uphill kilometers towards the finishing line. I think a breakaway will make it all the way again, especially with the tough start of the stage in the mind. There are still many hard climbs left in this Vuelta and the GC riders have to save as much energy as possible in this horrible weather.

I had big expectations for Euskaltel’s Mikel Landa heading into to this Vuelta. Landa did very well in Burgos and seemed to be in great shape. However, he hasn’t shown much of his qualities, until this Saturday. On the hardest stage of the race so far, Mikel Landa stayed with the favorites almost all the time and finished in 9th place. Euskaltel tried a big play with three riders (Urtasun, Martinez & Antón) attacking but they didn’t manage to get away. It really seems like the team has woken up after the good news of Fernando Alonso saving the team. Mikel Landa is more than one hour after Nibali in the GC and he’s not a rider they will give many thoughts should he attack. It shows a lot of strength to do as well as Landa did on Stage 14 and if he can recover well enough, I think he will try to give Euskaltel their first stage win in their last Vuelta España - as we have known them for 20 years.

Another rider who did very well on Saturday’s tough stage is Vasil Kiryienka. With both of his captains out of the GC, Kiryienka can now take his own chance and he tried a couple of times on stage 14. He didn’t manage to get away but when they were only 10 riders left in front, Vasil Kiryienka was still there. He faded at bit in the end and finished 26th but I’m sure his sensations were good. The strong Belarusian knows how to get into the winning breakaways and finish it off in the big mountains.

I also think Diego Ulissi has a good chance on this stage. The young Italian won the first mountain stage in Tour of Poland last month, also in rainy conditions. Ulissi is very strong on the climbs, not afraid of attacking and he packs a very good sprint as well. The final kilometer of stage 15 is flat and should it happen a few riders arrive together, it will be difficult to beat Diego Ulissi.

In the Giro this year, Vincenzo Nibali already showed he doesn’t mind the harsh weather. He is right now the strongest rider in the race and I doubt he will let go of the Red Jersey anymore. Of course, everybody can have an off day and it’s important to recover well after Saturday’s struggle. Therefore, it will be very interesting to see how soon-to-be 42 years old Chris Horner will cope with this long and difficult stage. So far he hasn’t shown any weaknesses uphill and with Robert Kiserlovski in outstanding shape, I guess the other GC riders just can’t drop him.

Alejandro Valverde said he had the worst day of his life on bike in Andorra. He was cold on the descents and it wasn’t until they started climbing he was able to get warm and find his rhythm. However, when he started to climb he was fast. Very fast! He overtook one rider after the other to finish 6th on the stage. Valverde knows the final on this stage climbs very well and if he can cope with the bad weather and stay in front, he has a very good chance of repeating his stage win from last year.

Katusha wanted to set up Joaquim ‘Purito’ Rodriguez near his home in Andorra but Purito simply couldn’t follow the attacks from Horner and Nibali. He decided to keep his own pace and minimize his losses and now the Spanish climber is 2:57 min after Nibali in the overall classification. He has 1:05 min up to Valverde in third place and I think it will be very difficult for Purito to make the overall podium this year. Of course, anything can still happen on these stages but Purito needs to find stronger legs if he wants to distance his rivals uphill.

If you are looking for other interesting riders to make the early breakaway, look to guys like; Chris Anker Sørensen, Andre Cardoso, Amets Txurruka, Javi Moreno, Rafa Valls and Ivan Santaromita.

Eurosport is covering this year’s Vuelta a España intensively. Before and after each stage you will get inside information from the many interviews with the riders. The interviewer is Spanish journalist Laura Meseguer. She knows what’s going on inside the peloton and each day she will get you her own personal winner picks for the stage.
For Stage 15, Laura picks Mikel Nieve to win.