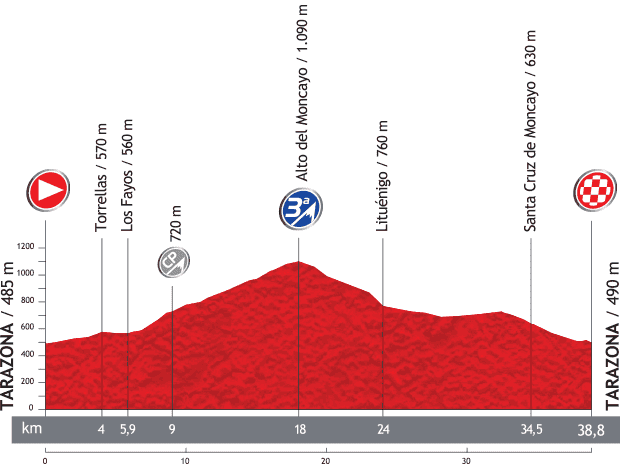 After a well-deserved rest day, the Vuelta continues with a time trial. This has already been a very tough race and it will be interesting to see how the legs of the GC riders will respond after a day off the bike. We have often seen riders having an off-day after a rest day and alone against the clock, you can really lose some time if you’re not ready.

This year’s Vuelta is one for the climbers and that shows on the time trial too. The 38.8 km around Tarazona include a long category 3 climb. The road book has Alto del Moncayo to be 9 km long but actually, it’s already been uphill for a while before the official start of the climb. Compared to the last time trial in the Tour de France this year, this isn’t as tough. It’s definitely a hard course but with an average gradient of just 4.1 % and no steep parts, Alto del Moncayo won’t kill the hopes of the time trial experts.

In fact, the second part of the route favors the big engines like Tony Martin and Fabian Cancellara. Most of the final 20 km are downhill and we can expect a fast finish with a tailwind on this second part.

Favorites
Not surprisingly, the bookmakers' favorite is Tony Martin. He’s the double World Champion and he’s simply in a league of his own against the clock these years. The last time trial of the Tour had two hard climbs on the menu and naturally, a big rider like Martin didn’t stand a chance against Froome and Contador. The climb on this time trial isn’t as hard as those in the Tour and with a long and fast descent, it will be extremely difficult to beat the German Panzerwagen.

Fabian Cancellara is probably the only rider able to take this win away from Tony Martin. However, Cancellara hasn't been the same time machine we used see in recent years. This is probably also why he’s now focusing on the road race instead of the time trial for the World Championships in Florence later this month. Cancellara looks very lean right now and so far, he has been been very good on the climbs in this Vuelta. Because of this, some may say the climb favors him over Tony Martin but I think Cancellara’s hard work in front of the peloton will show in time trial. Tony Martin has been able to “take it easy” and save himself for this stage and that will be important. Of course, Cancellara is still a world-class time trialist and it will be a close fight for the stage win Tarazona!

Outsiders
Looking at the start list, there are many strong riders able to make podium in this time trial. Specialists like Marco Pinotti, Stef Clement, Kristof Vandewalle and Lieuwe Westra all have what it takes to put in a strong performance. The climb may be too much for Vandewalle but I’m sure he’s eager to show off his Belgian national jersey. Pinotti did very well in the final time trial of Tour of Poland a month ago and on a good day, he should be up there fighting for top3. Westra has been very anonymous so far in the Vuelta. However, the team explains that Westra feels better and better every day and they now hope for a strong time trial from the Dutch national champion. For other good outsiders look to Luis León Sanchez, Jan Barta, Ben Hermans, Dario Cataldo and Edvald Boasson Hagen.

Astana has a lot of riders able to do well in this discipline. Jakob Fuglsang, Janez Brajkovic, Tanel Kangert and Andriy Grivko can, in theory, all do top10 but I doubt Astana will let them go full speed. There is still a long way to Madrid and Vincenzo Nibali needs his strong domestiques to be ready when it counts. Kangert sits 14th in the overall classification before this time trial and the team may give him the green light to try his luck. He did very well in the first time trial in the Giro this year and on a good day, he may re-enter Top10 overall Wednesday afternoon.

Overall Classification
Looking at the fight for the Red Jersey, I doubt Chris Horner will lead Vuelta España after this time trial. He’s more skinny than I’ve ever seen him and even though he has done good time trials in the past, I can’t see him keep the jersey. On the final, short (9.2 km) time trial in Tirreno-Adriatico, Horner almost lost 20 seconds to Nibali. This time trial is four times as long and despite the climb, Nibali will be able to take a lot of time on the American veteran. Last year, Horner finished 13th overall in the Tour de France but even though he was in great shape, he didn’t do well in the time trials. The first time trial in the Tour that year was about the same length as this one and back then, Horner lost more than three minutes to Nibali. The time differences won’t be as big this time but surely Vincenzo Nibali is able to take back the 43 seconds he’s after Honer in the GC. Actually, we may even see Nibali make podium in this time trial.

Astana’s big plan for this Vuelta was for Nibali to start out the race on 75 % and by the first rest day reach 100 %. So far, everything has gone according to plan and it will be a big surprise not to see Nibali in the Red Jersey at the beginning of Thursday’s stage 12.

I also expect Nicolas Roche to do well. Bjarne Riis always demands his riders to focus on the time trials and Roche has made significant improvements this year. He finished 24th in the final time trial in Tour de Suisse and no, that wasn’t because of the hard climb. Nicolas Roche actually had 14th best time after the flat part. In front of riders like Peraud, Millar, Monfort, Klöden etc. In the Tour the improvements continued as Roche finished  28th in the first time trial. The Irishman has lost 2.5 kg since the Tour and that really shows on the climbs. It will be interesting to see how weight loss will affect his time trial performance this Wednesday. He won’t beat Nibali but Roche should be able to keep the other GC riders behind him.

This is also a good course for Alejandro Valverde. He knows how to keep his pace on the demanding parts and Valverde is an excellent descender. The Movistar captain did very well in the final time trial of the Tour and even though this one isn’t as tough, he should be able to clock in a great time. Also, look out for his teammate Beñat Intxausti. The Basque rider is good against the clock and his time checks will be vital for Valverde. In addition to that, Intxausti starts just in front of Tony Martin. In the first time trial of the Tour, Thomas De Gendt started in front of Tony Martin. The strong Belgian had never been overtaken in a time trial before and he was eager to keep his record. At the end of the day, Thomas De Gendt finished 3rd on the stage.

Starting Order
Lieuwe Westre starts as number 18 at 13:31 and his time will most like stand for a while. Marco Pinotti starts at 14:15 and just three minutes later, it’s Tony Martin’s turn to take the starting ramp. Fabian Cancellara starts at 14:54 and as the last rider, Chris Horner roles out on the course at 16:50 local time. You can see the complete starting order HERE.

For this time trial, Laura picks Fabian Cancellara to win.