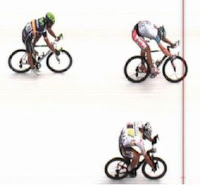 In Twitter world RT stands for Re-Tweet but for today's matter it stands for Revenge Time. Mark Cavendish admitted after his narrow defeat to Andre Greipel that he didn't make his kick until 200 meters to go - which proved to be too late. Now it's time to take back the winning spot on the podium!

Today's stage 11 holds the last chance for the sprinters before the peloton hits the mountains and I think it's safe to say that it definitely will end up in the bunch sprint this afternoon in Lavaur. Yesterday Cavendish lost Renshaw and Goss on the last climb and had to rely on himself in the sprint. Today the chances of losing his lead-out are very low and with the eager to reclaim the throne of the sprinters only bad luck can come between Mark Cavendish and another stage win!

And hey, if you don't believe me, just take a look at who the 4 experts think will win today right here.
Posted by Mikkel Condé at 9:19 AM